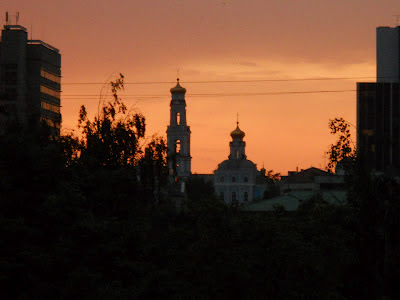 As always, I am on the road again, this time flying home from Russia.   The trip will take up most of the day and when I get home I will collapse for another day.  So, while I hope to have a blog for you tomorrow, I can make no promises.

Eight years ago, Ekaterinburg was just beginning to recover from Perestroika.  There was a stunned feel to the city and too much trash sifting through the park behind the opera house.  There was some new construction, mostly over-glossy luxury highrise hotels for foreign businessmen come to pick over the ruins of the Soviet Union, but what stood out was all the beautiful old buildings falling to ruin.  It was heartbreaking to see.

Today, Ekaterinburg is in the throes of a building boom of near-China proportions.  Cars throng the streets.  The old buildings -- those that haven't been torn down for the twenty-story hotels and office buildings and apartment complexes -- are being rehabbed.  Restaurants have multiplied five-fold.  It is no longer startling to run across  a Gucci store.  Expensive cars are everywhere.

"Ekaterinburg is for the experienced Russia traveler only," my guidebook said eight years ago.  That's changed.  They even have a tourist office!  (An innovation which Moscow really ought to adopt.)  On the airplane in, I chatted with a charity worker headed for Novosibersk, who said that if he could free up a week, he'd like to take a side trip here.

It all comes at a price:  Traffic, loss of much architecture that should have been saved, and a corresponding loss of strangeness.  Siberia comes in two varieties, a fan told me, Civilized Siberia and Wild Siberia.  As Ekaterinburg, always civilized, becomes more so Wild Siberia recedes from it.  On my last visit, an Old Believer gave me Xeroxes of his drawings to take to the West and a shaman, dressed in suit and tie, gave me a devil stone to unlock my potential power.  Nothing like that has happened on this visit.

But I cannot and do not complain.  Ekaterinburg is a beautiful and fascinating city and I'm grateful for both visits.  It's a privilege to get to see it change.  I hope to come here again someday, to take in Chapter Three.


Above:  Sunset from my hotel window.

And you definitely should visit Saint Petersburg in order to see second Russian capital in all its splendor.

Also to visit Eksmo, my publishers in Russia. Soon, soon, I hope