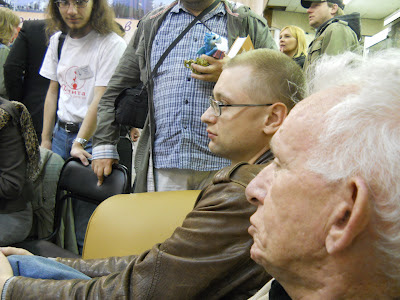 I'm still being lionized in Russia.  This can't be good for my karma; but I have to admit it feels great to my ego.  I'll probably have to put in several lifetimes as a mule to even the books.

Today there was an interview at the Itar Tass television station, followed by the launch of Aelita 008, the fiction anthology associated with the convention, followed by a session where attendees could ask questions of me and of Pavel Amnuel.

Finally, there was a bookstore signing at 100000 Books.  That's the actual name of the bookstore and so far as I can tell it's strictly descriptive.  It brought home to me what a terrible thing it is not to be able to read Russian.  There were so many books I wanted to dip into!  The fans there asked many, many questions of me, Pavel, and Alexei Glushanovsky.  It was a lively, wide-ranging and intelligent conversation.

Earlier, in the television studio, I noticed that there were forty framed photos of celebrities who had been interviewed on camera there, heavy hitters  like Boris Yeltsin and his ilk.  Among which was one single science fiction writer, a former guest of Aelita, who was . . .

No, no, not me.  It was Robert Sheckley.  The man's a literary god in Russia.   They really get him there.  Here's a terribly amateurish snapshot to prove I saw it: 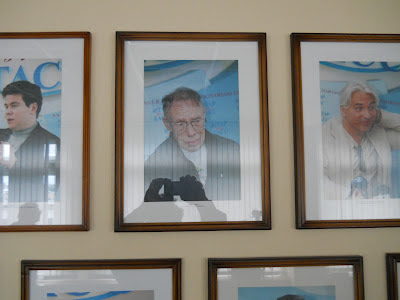 After the events, a batch of us went to a cafe in the park to eat, drink, and talk, talk, talk.  Convention organizer Boris Dolingo told me that among the convention's awards was an informal one dubbed the Aeliter, for the heaviest drinker of the convention.  "No foreigner has ever won it," he told me.  "Perhaps you'd like to try to be the first?"

Me?  Get into a drinking competition with an entire convention's worth of Russians?  "Oh my goodness, look at the time!" I said.  "It's after eight o'clock.  I really should be in bed."

Here's a photo of some of the science fiction volumes in 100000 Books: 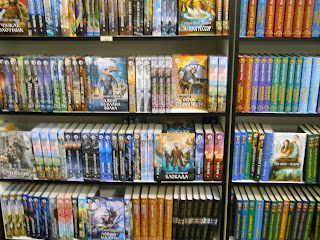 Someone told me that the Aeliter is a miniature golden barstool... but your name is inscribed on the bottom of the trophy, so that it can only be read if you are under it.

LOL! Wonderful visit report, and I can understand why you didn't try for the award! It's SO nice to hear there are places--quite a few, actually--where both SF and even writers are held in such esteem. When I lived in Greece I found that Greeks still hold writers in high regard. It gives one hope.

Well, SF and writers may be held in esteem over there in Russia. Thanks for the photo of the Russian SF book covers, however. Because they look -- reassuringly -- every bit as cheesy as the great mass of cheesy SF cover illustration from the late 1980s. And cheesy in the same kind of ways, too.

Conversely, there's nothing quite as garish as Baen cover art there. So at least Russian SF authors have been spared anything like this --