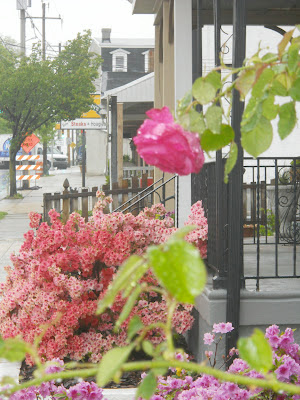 Over on Locus Online, they've announced this year's inductees into the Science Fiction Hall of Fame.  The 2012 honorees are Joe Haldeman, James Tiptree, Jr., James Cameron, and Virgil Finlay.

When Gardner Dozois was inducted into the SFHofF a year or three ago, he came back to report that those entered into it had their names and images etched into a (ceramic or glass, I forget) brick, which was then literally placed into a wall.  "So, all in all," he said, "I'm just another brick in the wall."

Gardner is one of the wittiest guys in science fiction.  Joe is another.  When I was the emcee for the Nebula Awards last year, he presented the best novel award and murmured something to me on the way to the mic and something else on the way back, and cracked me up each time.  So I'm sorry I won't be present for this particular award ceremony.

Above:  Roses!  We have blossoms on the rosebush out front.  Spring is now in full bloom.