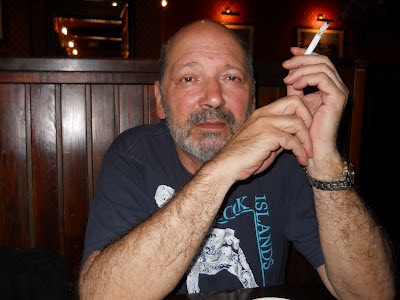 Exactly what is a dissident writer?  The virtuous, if rather stuffy, political conscience of his times, right?  Not necessarily.

Consider my friend Andrew Matveev.  As a young man in the Soviet Union, he discovered the music of the Doors and Janis Joplin and the writings of Hunter S. Thomson.  Immediately, he knew the kind of stuff he wanted to write.  But when he submitted his first novel to a publishing house, the editor summoned him to  his office and, jabbing his forefinger down on the typescript repeatedly, said, "This book will never be published."

Which is how Andrew was sent into internal exile, to Ekaterinburg which was at the time a closed city, and given a job as night watchman in the city zoo.  "Everything was grey," he says today of those times.  And, "The Communists took away a fraction of my youth and a fraction of what I might have been."

I wish I could say that Capitalism made up for all he'd been through.  But we all know the world we live in doesn't operate like that.  Today, Andrew Matveev makes his living through journalism, which eats up most of his writing time.  But he persists.  He endures.  Which, for a writer, is to triumph.

And there are good times.  Like the other day, when he and I sat in Gordon's Doctor Scotch Pub, drinking coffee (me) and tea (him) and talking, talking, talking.  Or today when he took Marianne and me to the zoo and reminisced about the old days when the entrance to the zoo was a small wooden house, ferociously cold in winter, and the great cats at night fixed him with murderous glares and growled to let him know that it was just him and them.

This is what it meant to be a writer in the Twentieth Century, and this is the price that some of us paid.

Excellent post, Michael, and one that says a lot. People not brought up in, or without even a passing acquaintance with, totalitarian systems haven't a clue--not a clue.

Excellent post, Michael, and one that says a lot. People not brought up in, or without even a passing acquaintance with, totalitarian systems haven't a clue--not a clue.

If I ever I begin to feel sorry for my condition as a writer, I think of Andrew. That puts it all into perspective.