In Which I Receive a Brand New Award 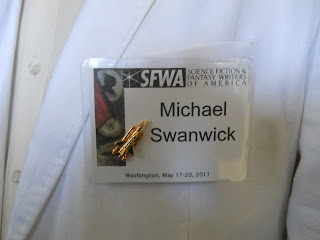 I am fresh back from the Nebula Awards weekend, where I had the great pleasure of presenting the Nebula for Best Novel to Jo Walton for Among Others.  Primary among those she thanked was her mother, "for being an evil person" and giving her novel/memoir a powerful villain.  To understand which you'll simply have to read the book.

There were a great many pleasures to the weekend.  Hanging with my best buds Eileen Gunn and Geoff Ryman, for instance.  Or getting to call brand-new Grand Master (and old friend) Connie Willis an underachiever in front of her assembled peers.  Listening to Marianne wonk about anthrax, Bubonic plague, and other favorites on the Epidemic Disease panel.  Schmoozing with dozens of people I like enormously.  Driving home in the company of Gardner Dozois and Susan Casper and talking about Life, Literature, and Everything.

But my personal highlight came when I was chatting with Geoffrey A. Landis and admired the little Space Shuttle pin he had affixed to his name tag.  "You like it?  I'll give it to you," he said.  "I can buy another."

"I was hoping that it meant you'd been nominated for an award I wasn't familiar with.  Like those little rockets they give Hugo nominees."

"I'll tell you what," Geoff said.  "I'll make it an award -- the Geoffrey A. Landis Pretty Good Author Award!  Which I now bestow upon you."

And with a flourish, he gave it to me.

I can't tell you how pleased I am with this award.  I like Landis and I admire his fiction and from what I can tell his work as a NASA scientist is pretty damn cool.  So this is a welcome honor.

There's the award up above, transferred to my own badge for safe keeping.

(Those of you who caught Geoff's reference to the Jerry Oltion Pretty Good Fiction Award may award themselves an extra ten points.)

I'm on the road again.  If you're reading this anytime after noon today, I'm on my way to Russia.  I'll try to keep you posted, but as history teaches us, there are no guarantees in Russia.

Actually, I'm sure I called it the "Geoffrey A. Landis really good writer award" (after all, I'd hate to plagiarize Jerry Oltion too blatantly)... but, like many awards, looks like it's been renamed.