Kids! Don't Try This At Home 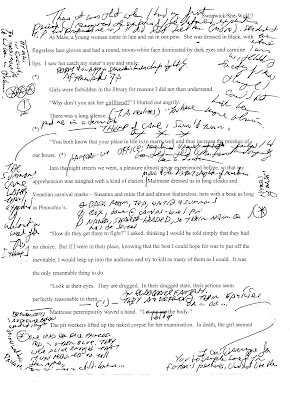 On those rare occasions when I teach writing, I'm sure to be asked, "What's your technique for writing?"

And my answer is invariably, "Oh, you don't want to do it my way."

I spent yesterday writing and at the end of it printed out what I had so far on a story I was rash enough to promise would be ready by the first of June.  Which means that it has to be ready by the 20th of May, because I leave for Ekaterinburg, Russia on the 21st.  Except that I'm one of the presenters at the Nebula Awards banquet on the 19th, so . . .

So, anyway, after I printed out the story, I went over it adding incidents, dialogue, description, and pertinent notes.  Up above is one page.  I spent all morning incorporating those changes into the text and expanding upon them.

It would have been a lot easier if only I could read my handwriting.

The story I'm working on is called "The She-Wolf's Hidden Grin."  To be published maybe late this year, early next?  It'll be interesting to see how much of the typed prose survives to the final version.