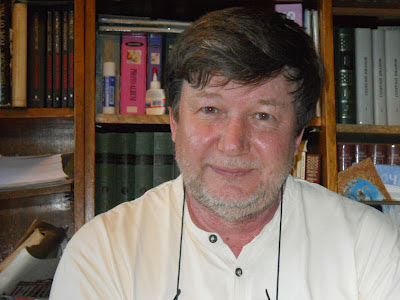 After the usual round of gallivanting about Ekaterinburg yesterday, Marianne and I, in the company of our friend Boris Dolingo, dropped by Eugeni Kasimov's apartment.  Eugeni is the head of the Urals Writers Union, which is why Boris refers to him as "my boss."  He's also a very fine poet, as I can attest to on the basis of four of his poems which I've read in translation.

His apartment is . . . well, a typical writer's apartment.  Writers build nests and then line them books and pictures, almost all of which have deep personal significance.  He has two lovely cats whose names I will render as Moosha and Mooka, though both are almost certainly properly spelled otherwise.  One of the high points of this visit to Russia is hearing Eugeni read (he's one of the best poetry readers I've ever heard; and I've hear a lot) a poem he wrote, inspired by The Iron Dragon's Daughter, while his cats prowled about his feet intently ignoring us.

We enjoyed a long literary afternoon with much talk accompanied by vodka, wine, port -- some had this and others that but nobody, as Boris joked we should, combined all three -- along with first black bread, caviar, Ukrainian spiced fat, and bowls of pelmeny, and then cup after cup of tea.  We met Eugeni's charming daughter Vasilisa, for whom he once wrote a children's book.  We enjoyed ourselves immensely.

And now Marianne and I are relaxing in our room in the Bolshoy Ural Hotel, resting up for more gallivanting tomorrow.  So we are happy and I hope you are too.

Above:  Eugeni Kasimov with a very small fraction of the books thronging his apartment.