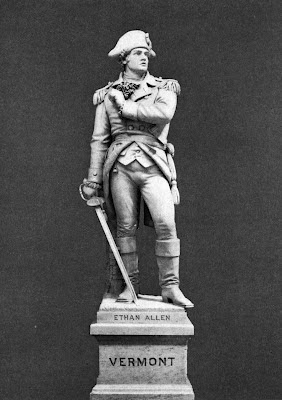 Did you know that from 1777 to 1791, Vermont was an independent nation?  Did you know that for years before that it was a functioning anarchy?  It's a fascinating story and if you buy me a drink I can tell it to you whole.  Oversimplifying wildly, the land in what is now Vermont was legally owned by New York land barons.  The people who settled there, however, had bought New Hampshire land grants and believed the land was theirs.

Vermont's greatest hero, Ethan Allen is best known for taking Fort Ticonderoga during the American Revolution and for his reply when its general, roused from his sleep and still in his nightgown, demanded to know in whose name he was being called upon to surrender -- "In the name of the Great God Jehovah and the Continental Congress!"  Though, he being an atheist, historians suspect he said something equally colorful but less printable.

Earlier, however, during a legal confrontation with the land barons' lawyers, who were trying to flatter him into cutting a deal, Ethan Allen sternly proclaimed, "The gods of the valleys are not the gods of the hills."  In retrospect, this was the moment when Vermont came into being.

All of which is necessary background so you will understand why, when I was asked to choose a theme for last year's Ragged Warmer, a writing competition for young writers in Russia, I suggested:  The gods of the valleys are not the gods of the hills.

I have just now learned that the winner of Ragged Warmer was Katerina Dovzhuk for her story "The Kachibey Opera House."  Her story was published in the very fine Russian science fiction magazine Esli (its name means "If").

My sincerest congratulations to Ms Dovzhuk -- or, more properly, I should say to Katerina Bochilo, since she married not long after winning the competition.  Since I also had my first story appear the same year as my wedding, I cannot help thinking this is a good omen.  May Ms Bochilo go on to become twice as successful a writer as me.  But may I first become twice as successful as writer as Pushkin.

Above:  The summit of the Ethan Allen monument in Greenmount Cemetery, Burlington, a place I visited many times in my youth.  Allen is buried somewhere in the cemetery but no one knows exactly where.