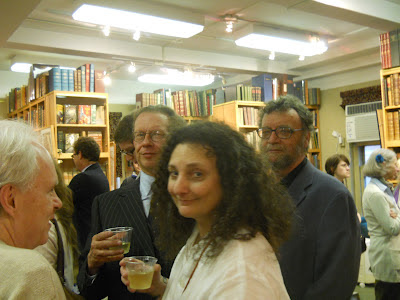 It was a Big Apple day yesterday.  Marianne and I drove to the city for a reception honoring Liz Hand's new book, Radiant Days.  So long as we we were there, we took in the MOMA retrospective of Cindy Sherman's photographs, which have significant relevance to a fantasy novel I'm working on.

Then we took a pedicab (my first such ride of the year and Marianne's second -- her first was in Peiking) uptown for the reception.  I'd list all the major writers who put in an appearance, but there were so many I'd be sure to miss some.  And writers are delicate creatures and easily offended.

Above is a snapshot taken during the reception showing (from left to right) Rick Bowes, Jack Womack, superstar editor Ellen Datlow and, back there in the shadows, me.