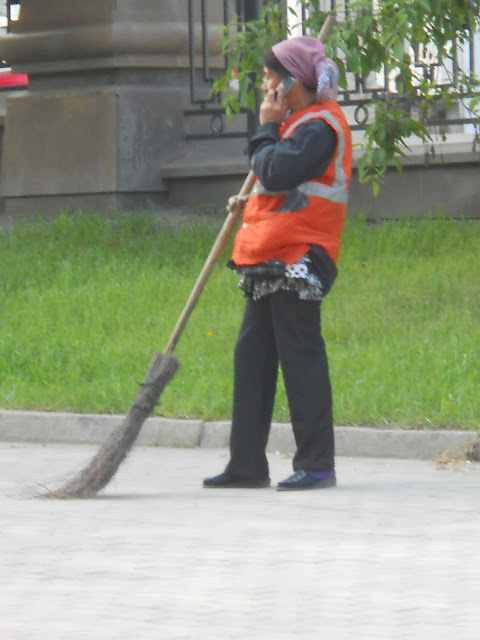 If writers have one character flaw (and most people agree that this is understating the case), it is that we have a weakness for the picturesque.  Which, at its worst, can make us unintentionally condescending -- "Look at the quaint Wisconsonite, with his wheel of cheese!"  So I was careful not to snap pix of the street-sweepers in Ekaterinburg, even though some of them had a distinctly raffish air about them.

But I could not resist taking the above shot because it was as good as an essay on how technology gets absorbed into a culture at different rates.  A besom and a cell phone!  Nobody called this one.

It's a long trek, five-twelfths of the way around the globe.  But Marianne and I made it in twenty-two hours, which is not bad time at all.  It's wearying, though.  So I'm going to spend the day lazing about, going through the mail, paying bills, and the like.  My apologies for blogging so briefly.  I'll be back in form on Monday.