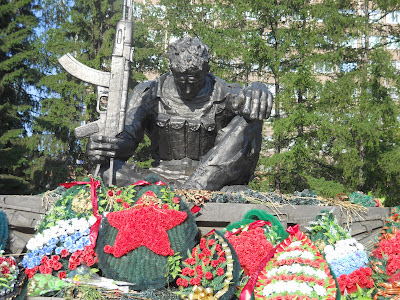 Yesterday was Memorial Day back in the States and apparently something analogous here in Russia because when Marianne and I went to see the Black Tulip in Red Army Square, a monument to those who died in the Soviet Afghan War, we saw military people just beginning to gather for what looked to be memorial services.

I did not think Americans would be especially welcome at such an event and I did not stay.  But I could not help wondering what our own Afghan War monument will look like when it's build.  And I could not help hoping that, impossible though I know it is, ours will be the last monument and the last Afghan War.

Why is the monument called the Black Tulip?  Because that was the nickname the Soviet soldiers in Afghanistan gave to the plane that flew the bodies back home.

Here's a Russian song on the subject.  If you go to YouTube, you'll find the lyrics beneath it.

Above:  a closeup of the central element of the Black Tulip.  Not shown are pylons to either side, each holding the names of soldiers who died in one year of the war.