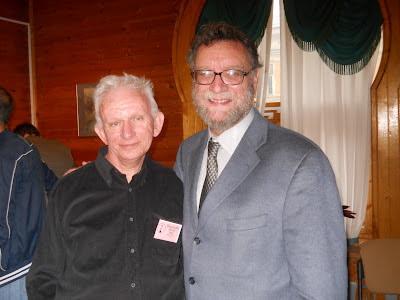 The opening ceremonies for Aelita were held yesterday, with the usual short speeches and introductions and a concert by local band Yantra.  Who were, quiet frankly, terrific.  But then, any music that includes a didgeridoo and a balalaika is going to be inherently interesting.  Then a party at the Museum of Literary Life of the Urals in the Twentieth Century (a fascinating place with a room dedicated to a virtual display about Urals SF writers, some of whom were present) hosted by the American Consulate.  Food and wine, accompanied by very good literary conversation, with me hurriedly jotting down the names of recommended writers.

And there I am above with Pavel Amnuel, Aelita Award laureate and now an Israeli author.  It was a pleasure and an honor to meet him.

I either owe an apology to Ekaterinburg or to the seductive powers of the Internet for implying that it might be difficult for me to get onto the Web here.  Eight years ago, it was so.  Now, free Wifi is pretty much everywhere.  So the only limit to my posting is going to be how busy I am.

Terribly busy, I hope.  I want to accomplish as much as possible while I'm here.

I'll let you know about the first full day of the convention.  And also (if I have the time and bandwidth) post a picture or two from this morning's stroll and my discovery of Engels Park.

Posted by Michael Swanwick at 8:44 PM

Thanks for sharing. Tell us more, yes yes yes!

Thank you for articles! There is also a small mistake - playing on opening concert progressive folk band called "Yantra" :)

Thank you, Andrew. I'll change that.

And now you know how bad my handwriting is. Even I can't read it with any degree of accuracy.