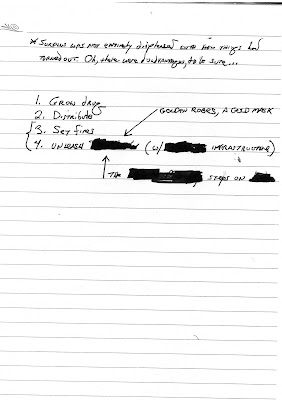 * Surplus was not entirely displeased with how things had turned out.  Oh, there were disadvantages, to be sure . . .

I've censored bits of this simply because someday you might read Dancing With Bears and . . .  Well, back when I was an undergrad at William and Mary, I used to read a newspaper which we all called The Richmond Times-Disgrace,   At that time they had a movie reviewer who judged films entirely by whether the ending surprised her.  She'd synopsize the plot and then conclude, "I would never have guessed that Norman Bates's mother was actually dead and he was dressing up as her and murdering people.  You won't either!  Highly recommended."

How many movies did this woman spoil for me?  I won't do that to you.

Was Psycho reissued while we were at W&M? Or were we even younger than I remember us? :D

Coincidentally, both the mystery fiction lists I'm on are discussing the "Spoilers don't matter" article in Yahoo News (and elsewhere):

Talk about bad reporting of a probably rather iffy test ...

No, I just used that as a convenient example whose spoiler everybody used. Though we WERE godawful young back then.

I'm sitting in a casino, mirabile dictu typing on a netbook, so I'll wait until I'm back home to check out the link.

No hurry on the link, of course, and I was teasing about date of Psycho / how young we were. Impossibly young, really. We didn't think we were at the time, though.

Have fun in Reno. One of my fonder memories is sitting at a video poker machine at Harrah's in Atlantic City, herbal cigarette in one hand (it helped combat the ambient second-hand tobacco smoke) and a comped drink in the other, waiting for someone to come refill the machine so the rest of my winnings would clink into the hopper, and wondering how my parents would have reacted if they could have seen me like that ... [laughter] --Mario