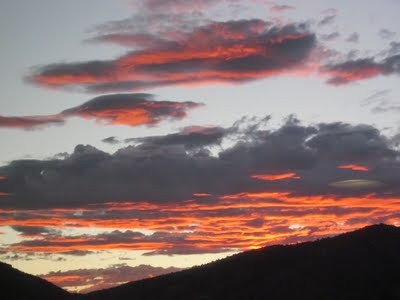 Another long and tiring and exhilarating day.  The above shot was taken from the jacuzzi of the La Quinta in Ely and it captures exactly how I feel.

On the elevator as I was leaving the Nevada Hotel today, I met a ghost hunter who'd been up all night searching for ghosts in the basement and sixth and fifth floors.  I was on the fifth floor and can testify that if there was such a ghost, he or she was most considerately quiet.

Then I went out searching for ghosts of my own -- ghost towns, specifically.  And even though I am, next to Darger & Surplus, the world's most distractable fellow (let's go hunting for garnets! let's look for the charcoal ovens! let's check out that junk shop! what's down that road?) I made my way to Hamilton and almost made it to Treasure City before deciding that a decent respect for the car rental company required that I turned back.

Hamilton was a boom town, founded on a silver strike in the 1860s which went away almost immediately.  But for a few brief, giddy years, it had something like 1500 citizens and became the county seat.  People built substantial houses in the belief that they were creating dynasties and buried their children in graves they thought would be cared for forever.

Alas, Ozymandias could have told them better, as witness below.  And yet the graveyard, overgrown and a-tumble as it was, contained several graves whose stones had been replaced by modern granite versions, and several more with fresh (by which I mean unfaded) plastic flowers.  A hundred and forty years later, those deaths are mourned by family.  I find that genuinely admirable. 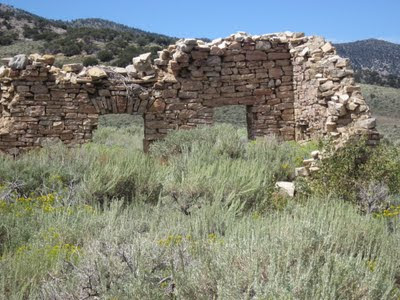