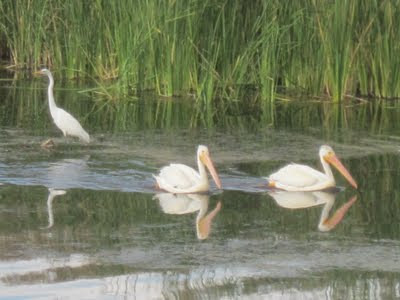 I'm supposed to be on my way home now.  But there's a hurricane headed for New York City, which means that every airport from Atlanta to Maine is closed.

So I went birding.

Nevada isn't known for its marshlands, but what little it has is prime bird habitat.  Marianne and I went to Stillwater National Wildlife Refuge and saw:

Also a coyote, bounding through the grasses.

Some of the birds were in such profusion as to be an event.  When eight great egrets tumble out of the only tree in sight and into the air at your approach, your heart lofts.  When four night herons lift from the reeds at once, you catch your breath.  When pelicans are coming and going, flying surely and landing softly in the water, swimming in a stately fashion in pairs, and lifting off again, so that there are always six in the water before you, only a curmudgeon could be unhappy.

Marianne and I went to Lovelock to take advantage of their self-promotional scam.  When you want tourists and have no attractions and your city is named Lovelock, what to you do?  You borrow a recent romantic folk-notion from China and declare it a tradition.  Declare that lovers lock a padlock to the chains behind the courthouse and throw away the keys as a symbol of their eternal love. Sell padlocks in the nearby stores.

It's nonsense, of course, and in its origins cynical nonsense to boot.  And yet . . .

And yet knowing all this Marianne and I bought a lock, inscribed it with our names, and threw away the keys, miles away, in the desert.  It made us happy.  Such is the power of symbols. 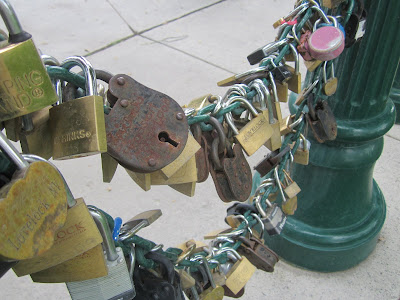 Above:  Two pelicans swim past a great egret.  You can imagine how happy I was.