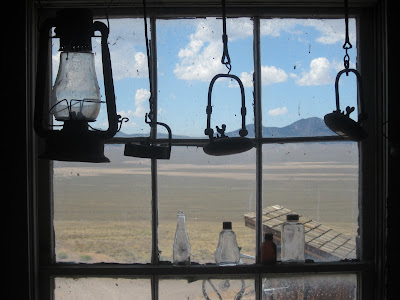 So Hurricane Irene smashed into the East Coast and as a result I couldn't get home.  Two of my surplus days are currently being used up in travel.  But the third . . . ahhhh, the third.

In addition to my usual running-about and haring down dirt roads and going to look at the glittery whatever, I visited the Berlin Ichthyosaur State Park.   It's a triple-threat tourist destination, because it includes:

a)  The ghost town of Berlin.

b) The Diana Mine, which can be toured.

c)  One of the most important ichthyosaur sites in the world, preserved in situ.

The park rangers are knowledgeable and enthusiastic, the experience is terrific, and because it's located a good hundred miles outside of Fallon, there are almost no visitors.  If you're ever in the area, I do recommend it.

Allow me to introduce a new feature:


Martinis of the World, Part 1: 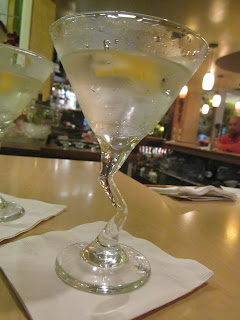 San Francisco Martini
A bit kinky, a little askew, but still the real thing.  Served with a twist.
*
Posted by Michael Swanwick at 9:13 PM

Mmm, twisted indeed! My preference is for a lime...it's always worked :0)

Thanks for the fish sighting. Did you hear about Arthur C. Clarke's diamond o' the Ritz sighting?

Love the drink hate the glassware.

I heard about the Diamond As Big as the Earth, if that's what you mean, Bruce. I'm betting that a lot of us are jockying to be the first to come up with a good story about it.

Chad, as a former Catholic, I loved your change on the quotation.