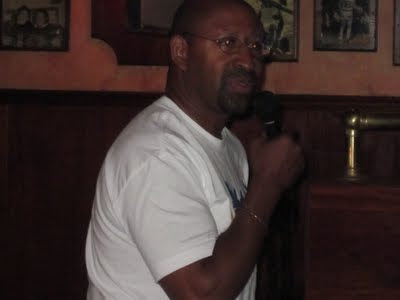 I went to a benefit Friday for the late Leslie Banks at Smokey Joe's.  It was organized by the Liars Club to help pay the medical bills she incurred in the course of dying.

Ms Banks -- I only met her once, so I won't pretend to be on a first-name basis with her -- wrote something like 61 books in a number of genres, including romance, African-American fiction, women's fiction, crime suspense, dark fantasy, and non-fiction.   She was probably best known for the twelve-volume Vampire Huntress Legend series, written as L. A. Banks.  In her spare time (!), she was active in Philadelphia's literacy programs.

And, oh God, did her fans love her!

As did her friends.  Leslie Banks was only 51 when she died and, despite that incredible rate of production, the medical costs incurred in the less than two months between diagnosis and death, ate up everything she had and more.  Hence the benefit.

It was actually a very pleasant evening.  There was a huge turnout, lotteries, a silent auction, music.  Probably the most satisfying moment was when Philadelphia mayor Michael Nutter put in an appearance with his wife, Lisa, to read a proclamation in praise of our absent guest of honor.  That's a rather murky snapshot of him up above.

Mayor Nutter was, I'm sure, chiefly present because of Leslie Banks' literacy advocacy.  But, without shorting her on that account, he was careful to praise her chiefly as a writer.

I don't have to know her personally to know that that would have pleased her.


Above:  "Wait!" I hear some of you -- especially the Brits -- say.  "Philadelphia has a Nutter for mayor?"  Yes, we do.  He's a GREAT mayor too.  The man walks on water.  And he shows up for benefits for fallen writers.

NPR did a piece on her today: