Another Bookstore Bites the Dust 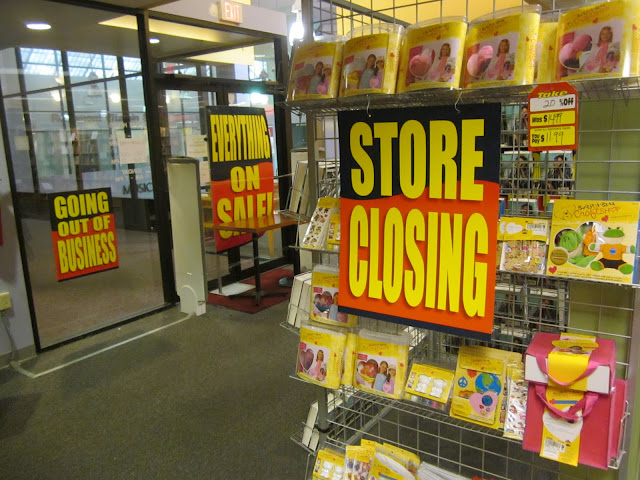 Sometimes it seems like I've spent my entire life watching bookstores close.  I came to Philadelphia in the winter of 1973 to discover that a landmark bookstore (I thought it was Leary's, but Wikipedia tells me that closed in '69) was giving away all its books free just prior to closing its doors forever.  For a time, my favorite bookstore was Middle Earth Books, but the owner finally had to shut it down and go into business rehabbing houses.  For years, Hourglass Books was the focus of the science fiction community in Philadelphia.  But then Fred Fisher concluded that he could do better things with his life than run an SF bookstore.  There was a great little bookstore on Main Street in Manayunk, where I discovered Amos Tutuola's fiction.  It didn't last.

And so it's gone.

I dropped by the Borders in Bryn Mawr today to buy a couple of books and witness the beginning of the end.  This store closing is particularly painful because between them the Borders and Barnes & Noble chain put the vast majority of independent bookstore in this country out of business.  And now, for reasons Marx mapped out over a century ago, the one has imploded and the other isn't looking very healthy.

Every time a bookstore closes, it feels like a friend has died.  I came home feeling unhappy and a little angry at impersonal forces that are beyond anybody's control.  The only consolation I have is that the chain didn't die because of anything I did.

God knows I spent enough money there over the years.