In Which I Am Interviewed

I was interviewed recently by Jonathan Thornton for The Fantasy Hive. On the whole, a good interview, I think. I have got to teach myself to speak cleanly in these things, though. I'm so used to being able to revise and polish my first drafts that when it comes to demotic speech, I forget that it's "first draft, final draft."

Still, you may find it interesting. Here's a sample.

Well it was 1966, my sister sent home from college a box full of books she was done with, and one was The Fellowship Of The Ring. I picked it up one night after doing my homework, and I read it—I did not sleep a wink that night. And that turned me into a writer. That gave me the determination; I wanted to write that book. Not something like it, I wanted to write that book. It also turned me into a Fantasy reader. I started reading every piece of Fantasy I could find. It took me about two years to read everything that had been published. And at that point, because there was so little else, I started reading science fiction, because it gave a Fantasy-like kick.

If you're interested in the rest of Thornton's interview, you  can read it here. 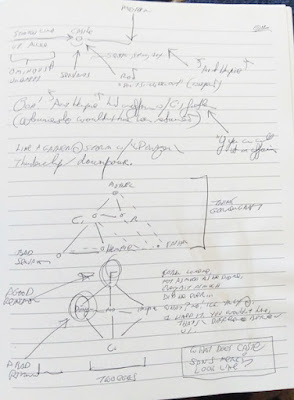 Three diagrams today, all in service of creating Chapter 3. I didn't give the chapters titles in the book because I thought they would slow the flow of writing. But all 21 chapters have titles. This chapter's title is The Unicorn Hunters.

The top diagram shows the plot moving from left to right. The stretch limo comes up the allee. I have annotated that the mood is ominous and unhappy. Caitlin arrives at the castle. The servants come out to meet her. Rod appears and there is a squeal, spin, joy. He tells her "Don't single her out" in a whispered aside.  Caitlin meets her mother and, later, Aunt Hempie will appear.

I briefly toyed with the idea of Hempie having had an affair ("if you can call it an affair) with Caitlin's father, but discarded it as unlikely.  I also compared approaching the dowager to a gatherint storm, a thunderclap, and a downpour.

Those odd marks to either side of "Aunt Hempie" are uncertainty marks, by the way, a punctuation mark I created to mean "probably not" or "purportedly" or "a placeholder" or to indicate irony. Ironically enough, Hempie is one of those few characters whose first name stuck.

The second diagram starts with a triangle between Caitlin, her brother Rod, and their mother. Caitlin is also in a triangle with Hempie and a Bad Servant. (The bad servant never materialized, probably because the servants had been glamoured to be invisible to Caitlin) Then the diagram is extended to include Caitlin's Father. The dotted lines indicate that the relationships (or you might call them power dynamics) have not yet been defined.

To the side, I wrote Think Gormenghast.

Finally, the third diagram shows the relationships between Caitlin's Father, the Dowager, Caitlin, and Hempie. The Dowager and Father have been circled because one is facing a good reincarnation and the other a bad reincarnation. Two eggs is written below because whenever someone high-elven comes close to transcendence, they appear as an egg of light.

To the side, I wrote:

Father loved me.
Not as much as he did me.
Every bit as much.
Did he ever...
What? No! Ick. You're lying.
I liked it. You wouldn't have. That's the difference between us.

This is another possibility I decided against. The ick factor was too high. Also, Fingolfinrhod has an underlying sweetness that would preclude it. At any rate, I couldn't do that to him.

But you have to be willing to consider things that would be terrible mistakes if used. Otherwise, you never know where the boundaries are.