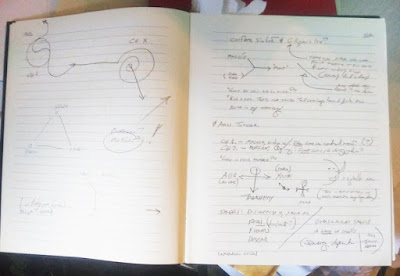 There are a lot of diagrams on the next two pages but I'll throw them out all at once because they were all drawn at the same time, trying to glimpse the same elusive white whale of a plot.

On the verso, a movement from yin-yang to spiral. A triangle establishing that briefly, Caitlin's name was Morgan. The same trite idea of combining Helen and Caitlin into a single entity. Also a reminder to re-read the Baltimore Catechism.

On the recto, I seem to have briefly renamed Helen Maggie. Another diagram opposing age and you, something (probably innocence) and treachery. A reminder to reread the great Amos Tutuola. Also, still caught up too enthusiastically in the notion of storytelling, are notes to conflate Sinbad and Gilligan's Isle,  and a beginning to a fairy tale version of The Beverly Hillbillies:

There was a poor man who found treasure on his land and was suddenly rich.

Also an exchange between Caitlin and Helen (who, remember, was a TV producer) which I quite like, even though I didn't use it:

"Why do you lie so much?"
"Kick a rock. That's the truth. Tell somebody how it felt. Now you're in my territory."

One more diagram, a short one and a rude one. It's titled Shortening the Way  and below the stylized rocket takeoff is captioned The novel at its simplest. At this point, I was considering giving Helen and Caitlin different names, both beginning with the letter M. Terrible idea.

Thanks for these diagrams! Most interesting. The geometry of action and relationships is a great tool. And it is fun to see how your thoughts emerge around the movements and obstacles. Of course the malleability of everything, (before reaching the published draft,) is what makes the magic!