Dreaming of an Old Friend 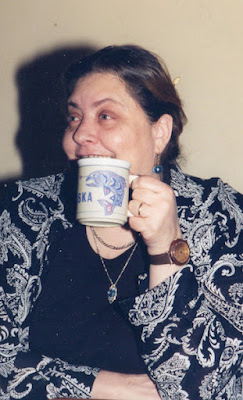 I had a dream last night. In the morning, I wrote it down:


I dreamed I was in a factory. Looking out the window I saw a bus parked outside, filling up with people. It was extremely crowded, but I saw someone I knew. "Is that--?" I asked.

A voice beside me said, "Hello, Michael." I turned to see and it was Susan Casper and we were both sitting in the bus. She was decades younger than she was at the end, when age and illness had drained most of the joy from her.

We talked a bit, about ordinary things mostly. I asked where the bus was going and Susan smiled in that fond and slightly mocking way of hers and said, "I didn't tell you where I was going when I was alive--what makes you think I'd tell you now?" Mostly, though, we just hugged.

Then the bus was gone and Susan with it. I was standing on the street and living people were all that remained.


When I read this to Marianne, she said, "They were such a big part of our lives." Meaning Susan and Gardner both. As they were to so many others. 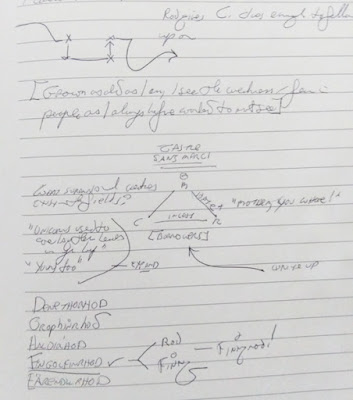 I should have posted this yesterday, but I either got busy or was lazy and didn't. Mea culpa.

Anyway, there are two diagrams today. The top one is a plotline/timeline. The loopy line represents Caitlin's path through the novel. The straight line down is Rod's abrupt departure from it. The straight line across is everything he does that we don't get to see directly. And the straight line up is his return to the plot.

The triangle is much more interesting because in it I'm plotting out the family social dynamics in Castle Sans Merci. M is for Mother and R is for Rod, who hates his mother, as exemplified by his shouting "Mother you whore!" at her. C is for Caitlin and there's an undercurrent (no more) of incest between her and Rod. The relationship between Caitlin and her mother, the Dowager, is left unexplained because it's a big part of what the novel is about.

One of the chief purposes of these diagrams is that in the course of making them, they spin off ideas. By the first, I wrote Rod gives C. clues enough to follow up on though I had no idea what they might be.

By the second, I idly jotted down What supernatural creatures exist in the fields? and that threw off:

"Unicorns used to lay their heads in your lap."
"Yours too."

Which, rather changed, became a reminiscence of Fingolfinrhod's. The bracketed Borrowers became a childhood memory of Caitlin's about an encounter with one of the thumblings that lived in the wainscotting of Chateau Sans Merci.

On the facing page was pasted a picture of Caitlin's brother, along with a long list of possible names that spilled over onto and then up this page, where I decided on Fingolfinrhod. The realization that the name lent itself to multiple pet names was a big factor, I think. Second only to the sound of it.

If you're curious, you can find the page here.

Posted by Michael Swanwick at 8:10 AM