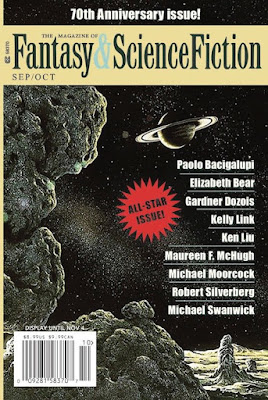 I've been meaning to return to short fiction reviewing for some time. So today I make a beginning. If I can find the time, this could become a regular feature on this blog.

Today, I review a story by an old friend.

Chance plays such a major role in our lives! It was chance that killed Gardner Dozois. He died not of a lingering illness but from a fortuitous disease picked up in a hospital whose staff chanced not to be competent enough to take care of his original complaint in a reasonable lenth of time. So when he wrote "Homecoming," he had no idea how close he was to death.

Nevertheless, it is hard to read this story as anything but his farewell.

The plot is deceptively simple. An old man comes to town. He has none of the symbols or accouterments of a wizard, but he is obviously no ordinary stranger. A young woman whose beloved grandfather is dying begs him to return the old man to health. He tells her he cannot and tries to explain that death is a natural part of living, but she is too young to understand what he is saying. So when he goes to the forest, she follows him and there she sees...

But I won't spoil the story for you. Anyway, one of the chief pleasures of a story by Gardner Dozois is his prose and his voice. Just listen to this sentence:

He went up the steep stairs to his room, his staff banging on the wooden steps as he climbed, like the sound of someone driving nails into a coffin.

Isn't that sweet? Doesn't it make you want to read the story?

Editor C. C. Finlay put "Homecoming" last of all the stories in F&SF's 70th anniversary issue and this position heightens the elegiac quality of the work. By chance, Gardner got the opportunity to say goodbye to all his friends and readers.

My own story, "Ghost Ships" is in the same issue. It is about losing a friend, saying farewell, and acknowledging the transience of all life. It was not written as a farewell to Gardner. But by placing my story immediately before Gardner's, Charles Finlay turned my story into a memorial to the man who was my friend for almost half a century.

Editors are not wizards, of course. But they practice an art very much akin to wizardry.

Two diagrams, actually. The two spheres are Earth and Faerie, the one Oneiric and the other Onomic.   Helen V.'s transport from Earth to Faerie is seen as An invasion, an irruption, an impregnation? Here, I was working out the underlying metaphysics of the worlds in my head. Bu as a happy spinoff of that thought, I came up with four crucial insights into the plot:

The plot underpinnings got more complex later on, but that was a good beginning. It's worth mentioning here that Caitlin never does realize she's on those quests. What Helen V. realizes is anybody's guess.

The smaller diagram shows Mother (the first time I acknowledged that in some sense Helen V. was one of Caitlin's mothers) and Daughter coming together. Then a key scene I was working on involving Rabbit and an Other. The supposition that there must be major drawbacks to each. (Yeah, yeah, I know. Plotting 101.) And finally, arrival at the Black Stone, after which, all is epilogue.

Powerfully said... I felt the same.