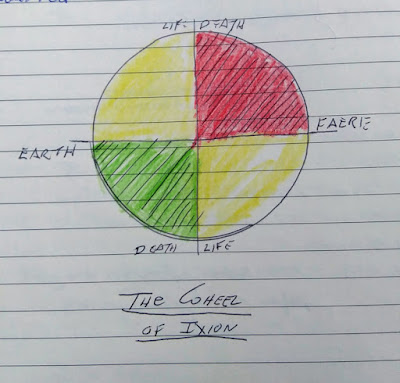 The Wheel of Ixion

This was an early effort to work out the philosophical underpinnings of The Iron Dragon's Mother. They got much more complicated later on. But here, there's still a dichotomy between Earth and Faerie. The two chief things they have in common are Life and Death. But it's not at all certain that death is the same thing for the fey as it is for mortals. For one thing, they have the possibility of being reborn, while on Earth (my Earth, which is not necessarily the same as the real one) that's not an option.

The single most relevant word in the myth of Ixion is "forever." This is the arrangement both words are given and there's nothing to be done abut it.

Posted by Michael Swanwick at 8:30 AM