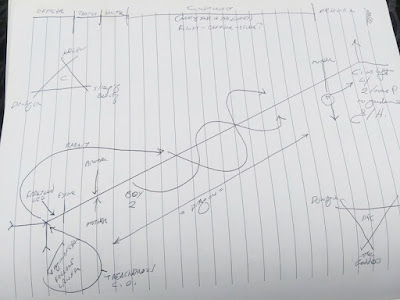 Okay, this is a good one. A diagram of the entire novel. I'll ignore the smaller diagrams, which are just workings out of relationships.

The diagram is read from left to right. The central line represents both the plot and the voyage of Caitlin through the novel. The first, level section is Chapter 1 with Helen V. The arrow coming up from below is Caitlin. They merge and then at the very end they part, going their separate ways.

On the line are marked specific events: the fractured leg, the escape, first appearances of Caitlin's brother and mother and, near the end, the appearance of Caitlin's again. Her fate at that point not yet determined. One swirl near the beginning introduces the virginity exam, her fellows, and her lawyer. Also a treacherous C. O. The line marked dragon is to indicate that Caitlin's dragon (or, rather, his shadow imprint, remains a constant presence for most of the novel.

The two swooping, criss-crossing lines represent Rabbit and a second boy, entering and leaving Caitlin's life through the novel ending up with the observation that C. was left with 2 loves & no guidance f / H.

What makes this diagram particularly interesting is that it gets almost everything wrong. At that point, I had been assuming there would be a romance for Caitlin which, in the actual writing, never materialized. (To be fair, she was on the run and didn't have the time for a serious relationship.)  The dragon urned out to be much less of a presence than I had thought it would.  The escape occurred after the introduction of Fingolfinrhod and the Dowager. Most significantly Helen never did become the rusted advisor that I'd thought she would.

Oh, and that treacherous C. O. never showed up.

But I had a goal to aim for! So it didn't matter that my speculations of how to get there were completely wrong. I was writing and progress was being made.