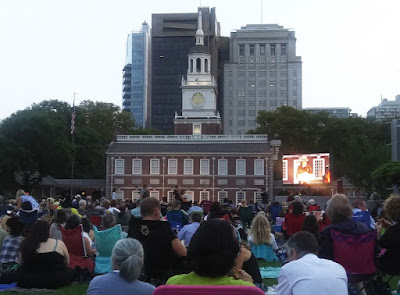 When metropolitans are asked why they live in a major city, they usually cite art museums, symphony orchestras, the opera... and when they're asked when was the last time they took advantage of any of those things, they usually say, "Well..."

Saturday, Marianne and I went to Independence Mall to see La bohème. This was a recording, played over big screens and speakers, of a performance of Puccini's crowd-pleaser that played at the Academy of Music last year.

And it had Independence Hall as a backdrop.

No dis to places where you can see eagles and bears whenever you wish, have the Rocky Mountains as a backdrop, or have trout streams running right through the back yard if you're lucky. But if you want to listen to opera on Independence Mall, you've just got to come to Philadelphia. 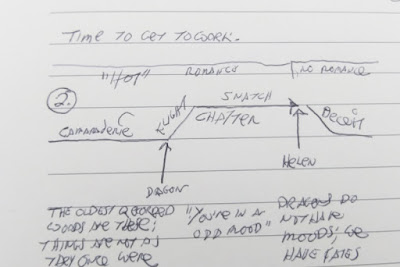 Time to get to work.

I don't know what the upper diagram marked "hot" romance and no romance was meant to indicate--it was an early notion that got dropped at some point. The lower diagram, though, shows the emotional movement Caitlin goes through in the first chapter.

Imagine the line as being Caitlin's life. It begins with cameraderie (sic; it should be camaraderie) with her fellow dragon pilots. The dragon enters as a presence as she goes into flight. They perform the snatch to the accompaniment of banter. Then Helen enters the picture. Followed by a descent (both physical, to the base, and moral) into deceit. The actual writing doesn't follow the diagram exactly, since it begins immediately after Helen's intrusion. But Caitlin's life follows the pattern, so it's ideation time not wasted.

In the course of drawing the diagram and thinking about it, three thoughts occurred to me so I jotted them down. They were

The oldest recorded
words are these:
Things are not as
they once were

Dragons do
not have
moods; we
have fates

Half the purpose of drawing diagrams is to see the shape of things to come. The other half is to bring thoughts like these, observations and scraps of dialogue, into existence. 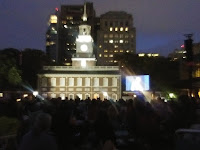