Bones of the Earth E-Book Sale -- Saturday Only! 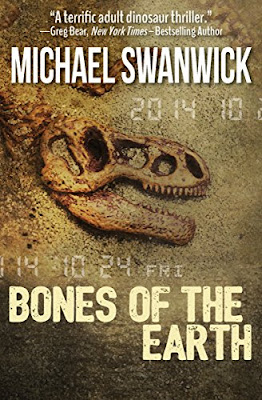 Just in time to give me something to write about in today's blog, I hear from Open Road Media that they're putting the e-book version of my novel Bones of the Earth on sale this Saturday. For one day only, the book will be available for $1.99.  Only in the United States, alas.

Here's what they told me:


Open Road will promote the feature via social media. We hope you can share the deal with your network as well. You can subscribe to the newsletters at the links below so that you will get the direct link to the deal on the day that it appears. 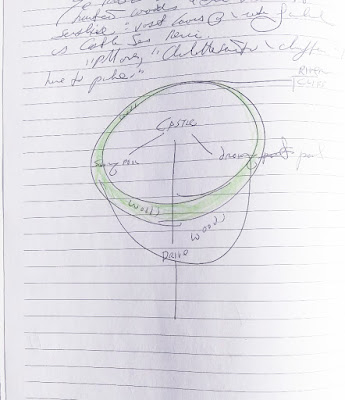 This is a very schematic diagram for Chateau Sans Merci and grounds. The castle is at the center. There's a long drive to it. The grounds are surrounded by woods. And it has both a swimming pool and a drowning pool. Neither of these feature in the novel. At this point, all I knew was that it was a posh joint, surrounded by woods, and that Caitlin would have to ask the chauffeur to pull over so she could puke at the sight of it.

Here's what that diagram became:

Château Sans Merci was situated in the fold of the valley where graceful hills shaped like a giantess’ thighs met in a bosky thicket. Against this verdant backdrop, the dome and orange roof tiles of the château gleamed in the sun. The formal gardens surrounding the manor house, Caitlin knew from experience, swarmed with dragonflies, humblebees, fairies, and wasps. Not far below, the Amberwine emptied into a small artificial lake with a marble shrine to Astarte at the upper end and a decorative mill at the bottom. There was a dock on one side of the lake and a red lacquered moon bridge on the other giving access to a modest wooded island that the family used for picnics and the occasional midnight tryst.

There is a great distance between the diagram and its realization. But the diagram is a necessary first step toward visualizing the great house where Caitlin spent an unhappy childhood.

Posted by Michael Swanwick at 2:19 PM

Thanks for your post. seems to be useful for me.