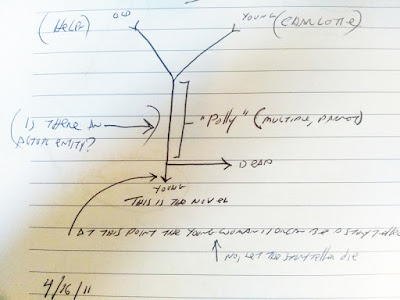 Here's the first overall diagram of the novel and it's amazing how unlike what The Iron Dragon's Mother eventually became my first thoughts of its structure are. I appear to have intended to blend Helen and Caitlin (then Charlotte) into single character.

Below the diagram I wrote:

This is the novel

No, let the storyteller die

Also major deviations from what the book became. Yes, the nature of story is a big subtext and, yes, Caitlin must learn how to lie. But the idea of her becoming a storyteller is... let's say inappropriate.