Strange Music in the Air

Saturday, I went barefoot in the grass -- on Broad Street, in front of the Academy of Music.  The Philadelphia International Festival of the Arts concluded with a street fair that drew easily 50,000 more people than they were expecting.  It all concluded with a performance by La Compangnie Trans Express (which started 45 minutes late -- in part because a quick-thinking security guard arrested a strangely-dressed non-English-speaking performer, but mostly because the other performers couldn't get through the crowds) which . . . well, it's hard to describe.  It was kind of like those little candle-chimes that people put out at Christmas.  Only with human beings playing drums and bells a hundred feet above the street.

The (rather crude) video above should give you some rough idea of what it was like.

My old friend Sandy Meschkow sent me an loc which he would have posted on the blog had he a Google ID.  Sandy and I used to work for the Franklin Institute Research Laboratories back in the day and he gave me all sorts of good Analog-ish material to use in my science fiction.  Which I didn't actually use because I wasn't yet capable of finishing a story, much less a hard sf story.  But it was kind of him to take me seriously.

As you might guess, Sandy is a fan of Robert A. Heinlein:

Mike, a big tip of the hat for mentioning www.tor.com, which led me to the Heinlein Symposium (August 11, 2010) and Jo Walton’s June 14, 2009 post, “The Worst Book I Love”, a valuable comment on Friday, which is my guilty pleasure RAH book. Although some space is wasted by those commenting on Patterson’s few outright errors and possible lapses in fact checking (Should an author Google to fact check a fact one has already Googled and then Google that And then hire a private eye to check further?.) and MUCH space is wasted on namecalling ( “If you think RAH wasn’t a racist and a sexist, then you are an even BIGGER one!”  And so on.). But there were some really valuable discussions. If you haven’t read it, you both might enjoy it. Marianne, there are some good comments from women old enough to remember the dark days when it was a thrill to find any women in a book who was as tough and smart as any male Heinlein character. We young guys in those sexist times didn’t appreciate how a Heinlein book could be as much of a literary rocket ride for girls as for us. I certainly would never have thought to hand a copy of  Have Spacesuit, Will Travel  to any of the cute girls in my classes and say, “You gotta read this!” 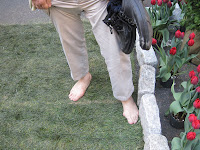 I'm laying the groundwork for my next-but-one novel and I wondered if either "Darger" or "Surplus" sound like any word or words in Chinese?  Approximately, I mean -- in a rough or punning fashion.  Because if they do, that might be a useful thing to know.

No fair drawing conclusions about where said novel takes place.


Above, bottom right:  Me.  Barefoot.  Broad Street.  Is this a rich world or what?

You could maybe transliterate 'Darger' into Mandarin so that it sounds like 'to discount/be discounted/on sale', or maybe 'the one with big ears' in Classical Chinese using Mandarin pronunciation of the syllables. You can bet there are lots of other possibilities.

Don't know what to do with 'Surplus' because it has a consonant cluster that I don't know how to transliterate into Chinese without splitting it too many syllables/syllables with potential for fun. There are standard was to transliterate names with 'pl' in them, but this would just sound like a foreign name I think. But that's just me as a non-native speaker!

My thanks, David. How would "the one with big ears" be spelled out in English transliteration?