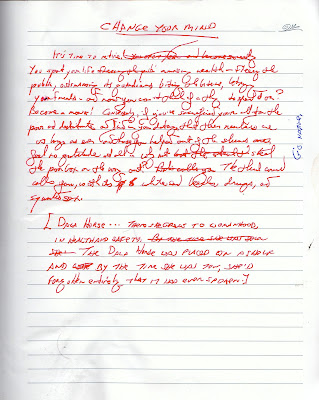 It's time to retire.  You spent your life amassing wealth -- fleecing the public, outsmarting its guardians, biting the biters, betraying your friends -- and now you can't think of a thing to spend it on?   Become a monk!  Conversely, if you've sacrificed your all to the poor and destitute, and find in your dotage that their numbers are as large as ever and those you helped out of the slums feel no gratitude at all... why not steal the poor box on the way out?  The third world calls you, with its white sand beaches, drugs, and squalid sex.

The above is an unfinished first draft for one of the sections of "The Book of Light," a sort of instruction manual for life.  This page being a little more cynical than most.

Then, notes toward a possible ending to a story I'd been working on for years, "The Dala Horse."

[Dala Horse... there she grew to womanhood, in health and safety.  The Dala Horse was placed on a shelf and by the time she was ten, she'd forgotten entirely that it had ever spoken.]

I didn't use that particular snatch of prose.  But I finished "The Dala Horse" and it's going to appear on Tor.com.