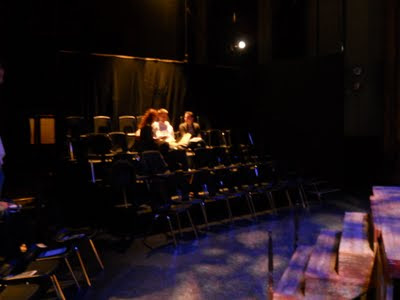 Like Falstaff, I am not only witty in myself but the cause of wit in other men.  And I value this.

So you can imagine how I felt when I saw this morning's Sluggy Freelance.

A word of explanation.  Last year, I met cartoonist Pete Abrams at Conclave in Kansas City.  I told him I read his strip daily, and he asked me to give him an award.  So I folded my calling card into an origami frog, inscribed it appropriately, and presented him with the coveted "Frog" -- for services to literature.

I also explained to him that Frog was my favorite of his characters, in part because of an incident when my son Sean was a boy.  We went out on the front porch one day to discover that my friend Gene, who was making wooden toys at the time, had dropped off several shopping bags worth of wood scraps.  He'd thought we could burn them in our wood stove.  But Sean and I proceeded to use them to build an enormous city on the kitchen table.  When we were done it towered higher than either of us, and Sean placed an origami frog in the center of it, explaining that the city was "so great it could only be controlled by The Frog!"

So this morning I clicked over to Sluggy Freelance where a story so complex that I despair of synopsizing it for you is in the process of winding up, and I found . . .  I found . . .

You can find the strip here.

Ah, the lonely romance of a small theater at intermission!  Marianne and I went to see Rosencrantz and Guildenstern Are Dead at Curio Theatre last night (a very successful run; the show's just been held over for an extra week) and enjoyed it immensely.  How many times have I seen that play?  I've lost track.

Almost forty years ago, during my last summer in Williamsburg, Virginia, I had a job working as a stage hand for The Common Glory, a seasonal tourist play performed in an open-air amphitheater on the edge of Lake Matoaka, I had the first half of that play memorized.  It summed up my life at the time -- adrift, directionless, and filled with dark omens.   It's strange how that bleak play bucked me up at a time when I needed it.

I won't tell you about the night my friend Paul was manning the rowboat tricked out to serve as a British Warship on the lake and the sheriff's underage daughter boarded the boat, naked and looking for action.  But only because if I stop there the incident sounds more salacious than it actually was.