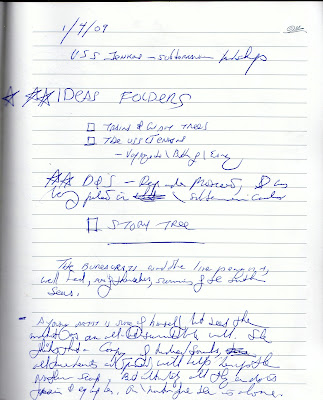 The U.S.S. Jenkins
-- voyage to the bottom of the earth

The first of these ideas may have eventually blossomed into "The Trains That Climb the Winter Tree," co-written with Eileen Gunn.  The second is a detail, a reference to Will F. Jenkins who, as Murray Leinster, wrote a novel with a submarine equipped with a device that allowed it to effortlessly pass through solid matter.

* * D & S -- Deep under Moscow, Darger was being poled in the subterranean canals.

The first appearance of the notion that in the Moscow of Dancing With Bears, the Metro had been converted to canals.

This is probably my idea to write a story on the leaves of a tree, one word per leaf, photograph the leaves and publish them as a picture book, collect the leaves when they turn color and fall in the autumn, and then include a leaf with each limited edition of the book.  It would be a Halloween story, of course.

The bureaucrats waddle like penguins, sure of themselves, [something] of the south [or maybe "truth"] seas.

A young artist is sure of herself but sees the market as an all-but-insurmountable wall.  She thinks that a Company of kindred souls, all true hearts and proud, will help her up the northern slopes.  But ultimately all they ever do is train and equip her.  On the mountain slope she is alone.