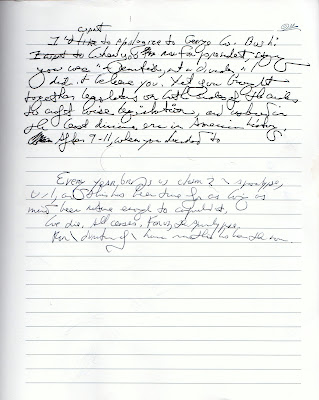 Okay, first of all, I apologize to supporters of the American president immediately preceding Barack Obama.  I try hard to keep politics out of my blog because . . .  Well, because I respect people who disagree with me politically and I don't want them to feel unwelcome here.  But the following is a distinctly partisan political rant which I ended up deciding that others could handle better than I in forums that would attract more eyeballs.  So I didn't finish it.

Those whose feelings might be hurt should skip over the following.

I want to apologize to George W. Bush.  When you ran for president, saying you were "a uniter, not a divider," I didn't believe you.  Yet you brought together legislators on both sides of the aisle to craft wise legislation, and ushered in the least divisive era in American history.  After 9-11, when you

I'd still like to be able to say that.  The rather obvious point of the rant which I never finished being that I can't.

And, drawing back from the present moment, I also wrote:

Every year brings us closer to Apocalypse, you and I, and this has been true since the mind has been mature enough to comprehend it.

We die.  All ceases.  For us, the Apocalypse.

For the duration of the human race, this has been the norm.