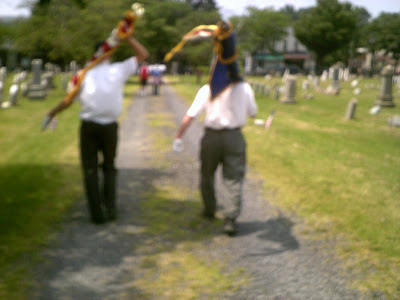 When I first came to Roxborough over -- my God! -- thirty years ago, the Memorial Day services were pretty sparsely attended.  The vets showed up, of course, including a very old veteran of WWI who had to be helped when he laid down a wreath in memorial of his peers, and a smattering of folks from the neighborhood.  But not all that many. The Vietnam War was recent memory and patriotism was out of fashion.  Even in a blue collar neighborhood.

Marianne and I always went, however, because that's how we were raised.  Both our fathers were in the Second World War and they always attended services to commemorate the fallen, some of whom they knew.  Once you realize that those being honored were people just like you who, most of them, died obscenely young in the service of your country, your own politics become irrelevant.  The very least you can do is to show up.

So that was my day, a quiet morning, a memorial service, and then (because life goes on) a cookout with friends.  Perfectly ordinary.  As, I hope, was yours.

Above:  Rather a blurry photo of two vets leaving Leverington Cemetery.  Richard Harding Davis was buried there, and a number of soldiers and at least one nurse who died in the Civil War.