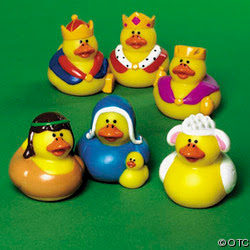 Gardner Dozois is still trying to get me onto Facebook.  The first time he tried, I said, "Well, what good is there to being on it?"

"No good at all," he replied cheerily.

"Gee, Gardner," I said.  "You make it sound awfully attractive.  But I think I'll give it a pass."

Yesterday I was at a party hosted by Sally and Daniel Grotta.  Gardner was there, so he had another whack at it.  "If you were on Facebook," he said, "you'd have seen the post of the Twenty Worst Nativity Sets Ever."

You can see it too by clicking here.  Marianne, who is a sincere Christian, thought at first that it was shameful to make fun of people because their idea of good taste doesn't correspond with one's own.  But then she looked at the above picture and said, "It is, however, abhorrent to manufacture and sell such things."

Allow me to wish all Christians reading this a Merry Christmas, and all others their own happy holidays.  I realize that I'm rushing the season a little.  But what the heck.  Joy is good.

The baby Jesus duck is so underwhelming compared to the others... which I guess is true of all nativity scenes. Insert metaphor for the significance/status of Christmas in our culture here:

I usually comment on the livejournal RSS feed of your blog, but it's come to me that you probably don't check there.

Anyhoo -- The reason that you should be on facebook, and twitter and all the other places is not because you have something to say, but rather because someone else may have something to say for you. Lock down your name in every emerging social media so that you don't have to explain on your blog "No, that dude posting as @michaelswanwick on twitter isn't me and his punctuation is terrible." You don't have to use it, but you should at least fence it off. There are a sad number of celebrities on various social networks who have to call themselves "TheRealNimoy" because someone already grabbed "LeonardNimoy".

Hmm. This shows just how last-century I am. Taking your advice to heart, Kyle, I just now went to livejournal and discovered that michaelswanwick was already taken -- apparently some public minded individual (absolutely NO sarcasm intended there!) used it to create an RSS feed.

So that takes care of all my livejournal obligations right? (This is not a rhetorical question, Kyle.)

Facebook is what you make of it. There are plenty of blogs that post what the blogger had for breakfast, too. But, since FB also offers a feature where the first few lines of your blog appear in your FB feed automagically (with link to the full version), it's in any case handy as an alternative means of disseminating information.

You could also set up a fan page (with the blog app) and a separate friend page (for friends and family), then be judicious in whom you add as "friend".

... On second thought, that would certainly leave me out. :(

And, sorry, Marianne, those duckies gave me a chuckle. The chicken and geese ones had me laughing out loud. But, then, I never really was a Christian to begin with.