An Officer and a Gentleman and a Former Little Boy 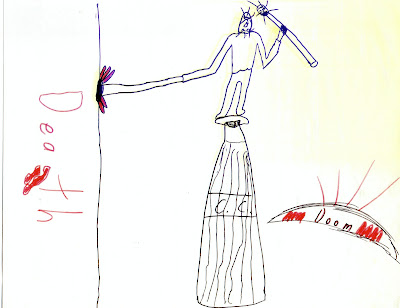 Marianne and I spent the afternoon visiting friends, as is traditional at this time of year.  First we visited dinosaur artists extraordinare Bob Walters and Tess Kissinger.  Then we went to see Gardner Dozois and Susan Casper.  Where, to our delight, we found Susan's son Christopher Casper had come for a visit, alone with his wife Nicole, son Tyler, and daughter Isabella.

It was a roomful of people we like tremendously.  So we were happy and I didn't get anywhere near the Intertubes until just now, and that's why today's post is so late.  I will not apologize for having my values on straight.

Christopher is a captain in the U.S. Army, an officer and a gentleman, and somebody you'd be proud to know.  But I remember him from when he was a little boy.  And when he was a little boy he drew some very strange pictures.  I mentioned to him that I still had a couple of them and he professed no memory of them at all.  So I'm posting one today and I'll probably post the other tomorrow.

Tyler, Isabella:  This is the kind of mind your father had as a child.  Pictured above is Death, Dancing on a Coca-Cola Bottle.

Is this the same boy who used to publish the Chris-zene at Balticon umpteen years ago? Just curious.