The Death of a Thorn Tree 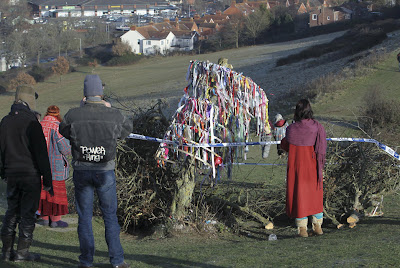 Okay, well, this sucks.
Vandals chopped down the Glastonbury Holy Thorn Tree the other day.  The tree has been revered by Christians in England for centuries.  It is a descendent of one which, so the story goes, was originally planted by St. Joseph of Arimathea, the wealthy merchant who gave his tomb to Jesus.  Shortly after he came to England, two thousand years ago, Joseph pushed his staff into the ground, saying it was weary.  The staff sprouted, and the hill where the thorn tree grew became known as Wearyall Hill.
Once a year, there is one of those old ceremonies that England is so good at in which a sprig is plucked from the tree and sent to England's monarch as a decoration for his or her Christmas table.  Queen Elizabeth II had just sent her thanks for this year's sprig.
And now some jerks have made the world a little drearier, a little less interesting.
There can't be many Christians who actually believe that the original tree sprouted from the staff of a saint who almost certainly never came to England.  But our stories are a great deal of what makes us human.  The good people of Glastonbury have nurtured and protected this particular story and this particular tree for centuries.  That deserves our respect.
Ernest Hemingway once wrote that we should be careful not to give up our superstitions, because they can never be replaced.  So, too, with our old folk customs.  I admit that I had never heard of the Glastonbury Holy Thorn Tree before its demise.  But I shall feel its loss for the rest of my life.
There is some small hope that the stump may sprout limbs come spring.  In the meantime, you can read the whole story here.
*
Posted by Michael Swanwick at 1:24 AM

According to the BBC, each tree, x, only lasts 150 years, anyway, then x is replaced by a tree, y, grown from a cutting from x. (How far back does one trust records of such a process?)

If the current tree doesn't recover, there should be plenty of saplings grown from its cuttings, which can replace it.

It makes me feel better knowing that, Matthew. The truth so often does.

But it was still a blow against innocence.

Vandalism sucks, whether it's some drunk chopping down a pretty tree or some kids spraying illegible initials on a cheap wooden fence.

My knee-jerk cynicism prevents me from invoking visions of innocence when anything in a religious context comes up. But I was sad to hear about the tree.