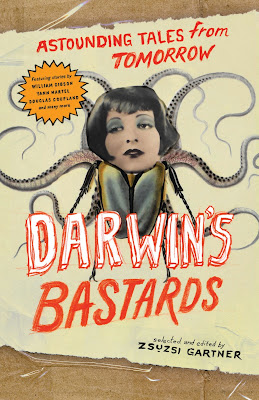 I'm almost done revising Dancing With Bears -- and a good thing, too, because the deadline is today.  Luckily, the December New York Review of Science Fiction arrived the other day.  Which means that the following review, which was published in the November issue, can now be posted here.

Two Short Fiction Reviews
by
Michael Swanwick
Here's a blast from the past in more ways than one.  William Gibson stopped writing short fiction seventeen years ago and given how much he clearly loves the novel form, I’d long ago abandoned hope of him ever returning to shorter lengths.  So running across “Dougal Disincarnate” in an anthology titled Darwin’s Bastards (D&M Publishers Inc., edited by Zsuzsi Gartner, $16.95 in trade paperback) was a distinctly pleasant surprise.
If I’d been asked to predict what a Gibson story newly published in 2010 would be like, I’d have ventured that it would be beautifully written, formally innovative, and deliberately anti-narrative a la his “Thirteen Views of a Cardboard City.”  Which is to say that I would have been more wrong than right.
It’s a ghost story.
The tale is set in “Kits,” more formally called Kitsilano, a neighborhood in Vancouver known back in the day for being a hotbed of hippie culture.  Writing in the first person, William Gibson – he makes it explicit that the narrator is himself – reminisces about a friend he’s known over the years, a nineteen-year-old who had an out-of-body experience after dropping a tab of LSD and was unable to return to the flesh.  (His body walked away and eventually became an accountant.)  Bill does what he can to help Dougal, who is unable to leave Kits, and the two bond over rented movies because, as Gibson explains, “the best cinematic SF is always to be found in very bad movies, but only in tiny, brilliant, fractal bursts.”  Dougal describes his existence, the rare time-mirages he’s seen, his occasional ability to connect with the incarnate.  Gibson waxes mildly autobiographical.
When you’ve got a location-bound ghost, it’s not much of a stretch to posit that the story is not about the young veteran of the Acid Wars but about the location itself.  Gibson is closely associated with Vancouver, and he came to the British Columbian city back when the counterculture was in full swing.  So we see Kits as Gibson does, in fleeting snatches of memory touched slightly with sadness for the fleeting moment.  The ghostly but not at all eerie Dougal allows him to add overlays of times and things he himself could not have seen, so that the story serves as something of a valentine for his adopted city.
“Dougal Discarnate” is written in a gentle voice that’s not trying to floor the reader, not trying to pull anything over on anybody – just saying what needs to be said as gracefully as possible.  It’s a lovely piece of work and if it leaves at least one reader feeling a little wistful over bygone days when such stories could reliably be expected to appear one or two or three times a year . . .  well, there are plenty of other good things that the past has wrapped in tissue paper and stowed away someplace safe for us.
As for Dougal, at the end of the story, as a reward for having served his purpose patiently and capably, Gibson gives him everything he wants and more.  Well done, gentlemen, the both of you.
*                                    *                                    *
“Fucking fuck,” begins Douglas Coupland’s “Survivor” (also in Darwin’s Bastards), as the thoroughly dislikeable protagonist rants about the inconveniences of life on board what he invariably calls the Luxurious CBS Yacht.  This sorry excuse for a human being is a cameraman for a near-future season of the television reality perennial Survivor and, it seems, typical of everybody involved in the show from the top executives to the very bottom of the food chain, the contestants themselves, who are valued only for their potential sexual availability.
Coupland is known for his postmodern structural tricks, and these are present here in the form of:
All of which works, though it wouldn’t were it not for Coupland’s rock-solid command of the more traditional storytelling skills.  Deftly, he sets up the scenario and then rings in the SF element:  global nuclear warfare.  Radio and television stations abruptly fall silent, airplanes fail to arrive at the airport, and in a genuinely creepy scene, the USS Ronald Reagan drifts by, a ghost ship with one side scorched black from an atomic blast.
Nobody responds well to the crisis.  The network execs abscond with the Luxurious CBS Yacht, abandoning those ashore without a second thought.  The contestants swiftly and efficiently set about murdering one another.  It is left to the protagonist to deliver the epitaph for a civilization that has just destroyed itself.
Coupland, it is worth noting, doesn’t waste a word of this strong, sobering, and utterly convincing story explaining why the world has committed thermonuclear suicide.
He doesn’t have to.
Above:  That’s one ugly cover, innit?  Got to be deliberate.
*
Posted by Michael Swanwick at 6:28 AM

Correction made. My thanks, Matthew.

Don't know how that happened. Mistakes are like cockroaches. They're practically impossible to keep out.

But unlike cockroaches, one need have no qualms about stamping on them.