Pickles, Names, and the Road 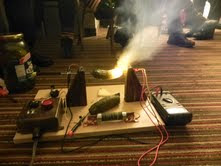 Marah Searle-Kovacevic has very kindly forwarded some more electric
pickles pix to me.  Thanks, Marah!  I love the smell of electrified pickles
in the morning.
I'm on the road again, but I should be able to post something in the morning.  In
the meantime . . .

And there's been some question lately as to why I pronounce my name wrong, so . . .


Among the reactions to Saturday's introduction to Miss Mrrlees, was Hanah's Dad's peripheral revelation that Robert Silverberg had told him that I pronounce my last name wrong.  To which I have three responses.
First of all, how cool is it that Silverbob knows how I pronounce my name?  That made me happy for the rest of the day.

Secondly, I pronounce the second W in my name as an act of filial piety.  It's the way my father pronounced his name and by the time I learned about the British (or, as they would say in Britain, the "proper") pronunciation of my family name, he was dead and there was nobody I could have asked who might have known how it was changed.  My father was a great guy.  Every time I use the American pronunciation (or, as they would say in Britain, the "wrong" one), it's a small reminder of him.  And it makes me feel happy.

Which said, whenever I'm in England or Scotland, I am careful never to correct people who pronounce my name properly.  Dad wouldn't have either.

And thirdly, it's not at all certain the American pronunciation is the wrong one.  The first time I went to Scotland, I discovered that in the south my name was pronounced "swannick" but that in the north it became "swanwick" again.  So it all depends on where my ancestors came from and how that particular moniker got hung on them.  Alas, like most Americans, I have almost no knowledge about my ancestors at all.  The family Bible was stolen sometime during the Great Depression.  While the family was at my great-grandmother's funeral, I believe.  That sort of thing happened a lot in New York City.

That's the medium-length explanation.  If you want the long one, try buying me a beer and asking me about Orkney.  The short explanation is:  Yes, I pronounce my name wrong, because it's the way I was brought up to pronounce it.  But I don't mean anything bad by it, and I acknowledge that the British pronunciation is almost certainly the correct one.

"or, as they would say in Britain, the "wrong" one" Not all of us would say that. It would never have occurred to me to pronounce the second "w" in your name, but it is your name. See also Cecil Taylor.

Oh, and wouldn't one expect the sounded-second-w pronunciation of "Swanwick" to be the older one?

Di-A-lated is almost certainly a regionalism, like nuke-U-lar. Not much to be done about it. Here in Philadelphia, "acme" has three syllables (ACK-a-me)though, oddly enough, acne only has two.

And I'd thought the word was only used by classicists and Wile E. Coyote!

Someday the British will have to finally come to terms with the fact that their language (and its various dialects) is a genie that escaped from its bottle several centuries ago. Actually, I imagine that most of the time the "proper pronunciation" business is simply a teasing game of endearment. For most of them.

Perhaps the rest of the UK will disagree with me, but:

[1] internationally, this is only a thing between the UK and the USA; for example, the Indians have their own way with English, but no one gives a flying about the divergence;

[2] some Americans seem to think that the Brits are bothered by the USA's existence as an independent nation, but I don't think I've ever met a one that is;

[3] the djinn was never in the bottle;

[4] there has to be some fretting about grammar, spelling, and pronunciation, else there is no language, only random sound and scratching; that doesn't mean there is only ever one right way to ...; at its limits this is comic.

Of course, the USA gets some stick just for being "top nation" (and no, we don't want that poisonous title back).

Will they miss it when the world is ribbing the Chinese instead?

Certainly language is never in a bottle... but with multiple authorities comes multiple authoritative standards for spelling and pronunciation. Insisting that one authority that represents one region should have priority is kind of preposterous at this point. (For English internationally at least, works pretty well in Chinese, for instance)

And in any case, the wonderful thing about language is how it manages keep its integrity even as it changes. There has to be fretting at some level obviously, but at the level where British people tell people in the US how to pronounce things I don't think it really has much effect...

> Hanah's Dad's peripheral revelation that Robert Silverberg had told him that I pronounce my last name wrong.

NOOOOOOOOO!!!! Robert Silverberg told me that *I* pronounce your name wrong. Which I do.

If I gave the impression in my previous post that I was mocking your pronunciation of your own name on the grounds that you're an uncultured American lout and thus not to be trusted with the language, please accept my humblest apologies. Whatever message you received, that's certainly not the message I was trying to send.

Yes, I did write "I made grumpy noises about Americans and their phonetic pronunciation", but that's simply because I believe complaining is one of the great and simple pleasures in life. Again - any toes trodden on were *not* deliberately targeted.

I'm a computer programmer, working in tropical cyclone forecasting (Still on topic. Trust me.) and one of the ways of estimating cyclone intensity from satellite pictures is the Dvorak method.

I'm used to pronouncing the name of Antonin Dvorak, composer of Slavonic Dance Number Five as (roughly) "vorjjaark", and it initially caused me pain to hear Australian meteorologists saying (again, roughly) "d'vorack". I finally made peace with it when I realised that the Dvorak method was named after Vernon Dvorak, retired meteorologist and resident of Ojai, California, and that's how he says his name. So fair enough.

Dorothy Parker is part of my holy trinity of favourite essayists (H.L. Mencken and George Orwell are the other two. Can you imagine how poorly they'd get along at the dinner table?), so I didn't at first pay any heed to her mocking of American Southerners for "using three syllables to pronounce 'egg'", but eventually I had to admit that she was just being a small minded city girl who wouldn't admit regional accents were real.

Matthew Brandi:
> [4] there has to be some fretting about grammar, spelling, and pronunciation, else there is no language, only random sound and scratching;

It's hard to draw the line - the kids at my seven year old daughter's school use the word "verse" as a verb meaning "to oppose in a contest", clearly derived from "versus". (as in: "Do you want to verse me in this game?")

The other day I told her that wasn't actually a word. Then my conscience compelled me to give her an extended lecture on language drift, standardisation, and practiced vs. prescribed speech (though somehow I forgot to mention the Academie Francaise. We'll have to have part two of the lecture later.) I ended up telling her it wasn't a word yet. Watch this space.

And thinking of which, I must do something about that "Hannah's Dad". I just happened to first post here while logged in to a family photo blog. It's not really my idea of a permanent internet identity.

Michael Swanwick again:
> If you want the long one, try buying me a beer and asking me about Orkney.

I would buy you a beer, but it would have gone flat by the time it got to you. Orkney as in the islands? Which brings us to...

Melbourne has a suburb (and a football team) called St. Kilda, and I've always been curious as to who Saint Kilda was and how she or he was martyred. Searching dictionaries of hagiography proved fruitless.

Eventually I found a book on the island(s) of Saint Kilda, which mark the westernmost edge of the Hebrides, and seem to have given their name to our suburb. There was, however, no Saint Kilda. It seems to be a corruption of something Nordic, though no one can agree on exactly what.

The islands were evacuated to the Scottish mainland in the early 1920s, possibly because they were just too damned dismal to live on.

I would stipulate that I really AM an uncultured American lout, but my principled refusal to use smiley-face emoticons would only make things worse.

Incidentally, there is a St. Jones River in Delaware, and no one knows why.

> Incidentally, there is a St. Jones River in Delaware, and no one knows why.

Patron saint of unfulfilled cravings. Died waiting for a punchline.

Even if it originated in a mistake or a piece of impish perversity (see also "liaise"), this is certainly not in need of correction. (Views about its place in the language might be wrong, but that's a whole other kettle of fish.)

I hope I was clear that our urges to "correct" are often absurd, and that there is not one true way. That's not to say we can do without correction.

But what about the (I assume silent) T in some spellings, as this I came across in a Piers Anthony posting related to Before They Were Giants:

"I did however, like the last one, “Ginungagap” by Michael Stanwick. It seems he has won numerous awards, as most of the authors in this volume have, but I never heard of him before this.I will be aware of him hereafter, though, because this story is sharply written and intellectually stimulating."

Perhaps that "Michael Stanwick" is related to the actress Barbara who spelled her version of your name with a y.

How very strange that Piers Anthony should have just now become aware of my first published story, when I was aware of him all the time and for some years beforehand.

There's a moral here somewhere -- something modest and without malice or resentment -- but I can't quite put it into words.