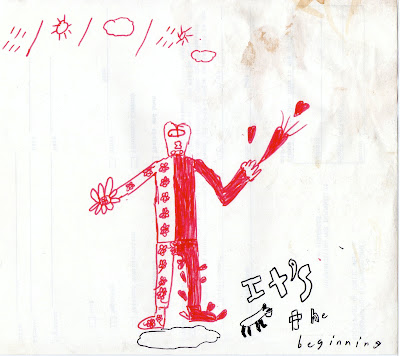 Here, as promised, is a second drawing by the very young (but that was long ago) Christopher Casper.  It's titled Live-and-Love.  He did a lot of these kachina-like figures for a time.  Another, I remember, was Life-and-Death.  He was definitely hooked into some kind of cosmic ley-line for a while there.

So now I bet you're thinking, nobody could come up with an appropriate sound-track for a picture like that.  Wrong, wrong, wrong.  Click on the video below, a cover of King Crimson's immortal 21st Century Schizoid Man by the Japanese quintet Seasons.

I haven't been able to find out much about Seasons -- their website is, understandably enough, in Japanese.  But my goodness!  That's all I can say.  My goodness!

Shawn asked whether there was an official pub date yet for Dancing With Bears, whether the title was official, and whether it was my own invention or that of one of the contest entrants.  And the answers (please pause here a moment in order to artificially build up suspense) are . . .

1.  Yes, I heard just the other day that Night Shade is moving up the publication date to May 1, 2011.  That's May Day, for all the leftists and Catholics out there.  Beltane, if you're a pagan.

3.  The title was, regrettably, my own invention.  But there's still hope!  The novel may or may not employ a sub-title which was suggested by a contestant.  If it survives the the long publication process, said person will indeed be getting a box of schwag.  Books and such, I mean.  Not marijuana.

I think their "Starless" is better, but then, it is a prettier tune to start with.

And there's always Either/Orchestra's epic "Red", but I don't know that anyones's ripped that off & YouTubed it.

Fripp at an interval talk back in the mid-80s: "People call me a pretentious, old hippie. Pretentious? Yes, I make a claim. Back in the day, people said, 'Robert, you were never a hippie.'" (Or words to that effect: over a quarter century, my memory's not so good.)

Soon as I get back to the office in January, I shall do my best to translate at least a little of that site. This is a group worth further investigation, thank you for posting the video, Michael. I've re-posted it to Facebook (giving you full credit).

Merry Christmas to you, Marianne, and Shawn.