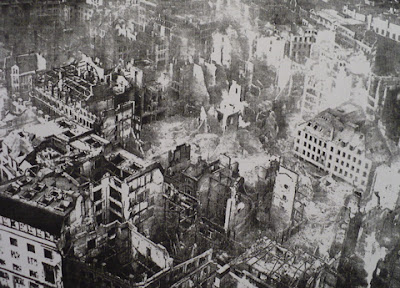 A friend who conducts tours around the City of London once told me that she quickly learned to skirt the edges of the damage done by the Blitz because the endless recital of what had been lost seriously depressed her clients.  It's a wise and useful rule of thumb.  Periodically, however, we should make exceptions.

Today is the 70th anniversary of the destruction of Paternoster Row.  During a bombing raid that many consider the worst of the Battle of Britain, the Luftwaffe attacked London's city center with a combination of high explosives and incendiary bombs.  Paternoster Row, the heart of British publishing for centuries, was destroyed, along with surrounding streets and far too much more of London.  The damage included dozens of publishers' offices, printers, warehouses, and bookstores.

Between five and six million books went up in flames in a single night.

It was but one incident in a war that cost millions of lives (even if you consider all those murdered in the Holocaust to be victims of a separate madness).  But one that should be remembered.

Above:  A view of the damage from the roof of St. Paul's Cathedral.

The books themselves could be reprinted. The loss of the publisher records, as well as of the old buildings, is what I mourn.

What's worth celebrating is the very existence of that sad, sad photograph -- thank you, Winston Churchill, for insisting St Paul's be saved.

... and my paternal grandparents' café.

(Don't worry: although the business was lost, they were not.)

The British paid such a great price, and made so little a fuss over it afterwards.

Albert, our next-door neighbor, was in the RAF. He started out as a mechanic, since only gentlemen were allowed to fly and he was an East Ender. By the end of the war, he was a bombardier, because most of the gentlemen were dead.

My family and I are much more impressed by this than he is.