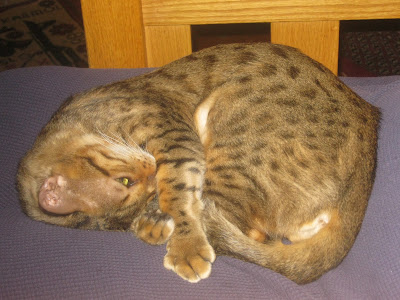 It's a slow news day because I'm still working on editorial revisions and Marianne was away for the past two days, making arrangements for her mother's 100th birthday party.  Plus, any minute now, the mechanic takes our car away for what he swears will be all but the next to the last time necessary, so it looks to be an uneventful day today as well.

So, while one of my core ambitions as a blogger is to not be one of those guys who's always foisting off cute picture of his cat on you . . .  Look at how cute Miss Helen Hope Mrrlees looks, curled up on Marianne's lap, pretending to sleep.  Awwww.

I'll do my best not to over-share Hopie with you.  But if we ever get a picture of her arching her back, it'll be so here.  She rises up twice as high as you'd think she could.  It looks like a feline lift-bridge.

I saw Letters From Iwo Jima the other night.  What a gutsy movie for Eastwood to make!  My father was in the European Theater in WWII on a bomber.  Marianne's father was in the Navy and he resolutely refused to buy a Japanese car.  "I'm not a bigot," he'd say.  "But those people tried to kill me!"  So I'm not your stereotypical Liberal soft-on-America's-enemies kind of guy here.

Still.  To see what may have been the most brutal fighting of the war from the perspective of the Japanese -- who knew that they were hopelessly outnumbered, that they were going to die, and that their superiors had given up on them -- was a revelation.  There's a particularly brilliant scene where an officer reads a letter he finds on a dead American from the G.I.'s mother, not realizing how he's demoralizing his subordinates.  The viewer, however, sees their faces as they realize that the men they're going to die fighting are as human as they are.

Wonderful stuff.  I recommend it.

I'll look for the movie, Michael. My father, who lost his leg in WWII, wrote a clearly autobiographical short story while he was recovering in 1944-45. There is a very affecting vignette in it, in which a group of Marines enter a Japanese camp that the Japanese have left only minutes before. There is rice cooking in a pot on a fire and underwear hanging to dry on a tent rope. It's very subtle, but clearly the viewpoint character is struck with the realization that the enemy is just guys like himself.

PS: Hope is a certainly a lovely cat.