Yes, In The World 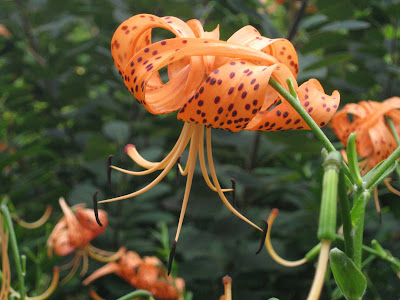 This is the  last Tuckerization  -- "In the world?" as my friend Turtle might have said, back in the old Acid Wars days -- that I agreed to do for Clarion West.  It's number 43 in a series of 42 and, appropriately enough Henry Wessells commissioned it to include himself, Eileen Gunn, and "maybe Avram Davidson as well.  So I Tuckerized Henry, Eileen and . . .

Well, see for yourself.

Fleeting Notations
by
Michael Swanwick
Henry Wessels, mounted on a Czechoslovak two-stroke motorcycle, was following the trail of Alexander the Great and had almost reached Libya, when he met the American.  It was in a shabby hostel which by North African standards overcharged outrageously.  He’d stowed his meager gear and was glancing through the books in the common room – paperbacks mostly, left by earlier trekkers – when she said, “You look like a bookman.”
“Why, yes,” he said, “Why do you –?”
“Out of all these books –” there couldn’t have been more than thirty, left by earlier trekkers – “which do you think has the greatest wah, the most presence?”
It was an interesting challenge. After thought, Henry chose one with green boards and a gilt title worn illegible by many fingers.  “This.”
The woman snatched the book from his hand and flipped through it until she found a notation at the bottom of one page:  The griffin, it has been postulated, was invented by Scythian nomads to explain Protoceratops skulls discovered in the Altai Mountains.  What monsters will my mummified corpse give birth to, long after humankind is gone?  A kinder man would turn back now.
The American stuck out her hand.  “Eileen Gunn.  I’m on the trail of a magician and I need someone who can find these things.  You’re hired.”
So the adventure began.  They traveled first by camel and then by airship.  They stopped at inns and bazaars and the estates of the wealthy, and everywhere Henry found books with the magician's anonymous annotations.
I have seen computer languages rise and fall like the cities of Lemuria and Mu, so that the 1960 Census, the first to be preserved on magnetic tape, is now as indecipherable as the as yet undiscovered Linear G.  Yet da Vinci's notebooks remain.  There is nothing so enduring as a book.
and
Edmund Hillary, of Everest fame, commissioned Michael Ayrton to create a golden honeycomb for his estate.  Daedalus, perhaps, created something similar when he invented the lost wax process.  When it was placed on a low pillar as sculpture, “Bees came,” wrote the critic Guy Davenport, “and filled it with honey and their young.”  If only Davenport could have gone back in time to mentor Hillary, Aristotle to his Alexander, the allegory would form a perfect Gordian knot.
and
Iron filings were mixed into the feed of Weyland Smith's geese so that their droppings (gathered, doubtless, by some poor sonofabitch graduate student) could be smelted down to yield nitrogen-rich metal for a sword blade of superior murderousness.  It makes one wonder what dirty secrets Mother Goose was hiding.
“We're getting closer,” Gunn said.  “We'll catch up to him soon.”
Yet when they finally reached the oasis of Jupiter Ammon, they found nothing there but a book carelessly dropped on the sand and a most profound absence.  “Avram’s dead,” Gunn said flatly.  “We came all this distance for nothing.”
Wessels picked up the last book and scanned it for notations.  “Look,” he said.  “What does this mean?”
After a very long silence, Gunn reluctantly said.  “I think it means that he wants us to write.  Not sometime.  Not tomorrow.  Today.”
They walked away from the oasis, leaving the book open behind them.  One last notation glowed in the desert sun.
All your life you’re running from something, it read.  Then it finally catches up with you and you discover that it’s nothing.  Nothing at all.  Sheesh.
*
Above:  A tiger lily.  It won't last long.  But while it does, it rules the Earth.
Posted by Michael Swanwick at 1:41 AM

Fun story, although Avram would never have referred to Leonardo as "da Vinci."

These stories have just been delightful.
Thank you.

Thank you, Michael. And thank you, Henry.

I will go forth and write. It is the least I can do in the face of genius.

PS: Greg, step away from the Internet. Write.

I have truly enjoyed reading all these wonderful stories Thank you.

I have also finished "Stories all new-tales edited by Neil Gaiman and Al Sarrantonio"( the edition I have is not as extraordinary as yours judging from the photo you posted!) and Goblin Lake is one of my favorite.
Mille fois merci.

You've made me miss Avram Davidson all over again. Funny how often that happens.

Ms. Gunn, I hope his bio is still one of the things you're going forth to write. I can't wait.

Ahhh, but it's not certain which Avram is absent in the story. Very common name among magicians.

More seriously, I'll consult Eileen as to how AD would have referred to the man before any reprints of that story.

I am delighted with the story and recognize the command it contains. I, too, will go forth and write. Many thanks!