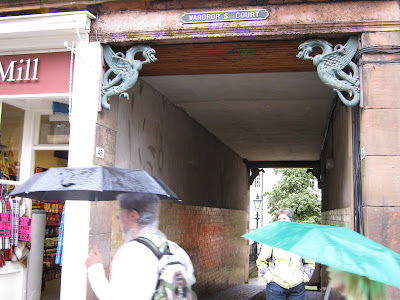 Among the many wynds and closes twisting off the Royal Mile is Waldrop's Court.  Bringing inevitably to mind the lines:

For I have been tae Waldrop's Court

And met strange justice there . . .

Somebody really should fly Howard Waldrop out here to write an Edinburgh story.


But never mind that.

But never mind that.  I was hurrying past Waldrop's Court on my way to see the world premiere of Ray Bradbury's 2116 the Musical.  Which was wonderful, magical, an awful mess, and well worth seeing.

All the credit goes to a first-rate cast, terrific costumes, and wonderful makeup.  Where the play falls down is, alas, on the plot level.  Back in the 1950s, it seems, Bradbury started to write a musical for Charles Laughton and Elsa Lanchester to perform in London.  Enough survived to make half a play and over half a century later a second half was cobbled together from fragments and synopses of Bradbury's other works.

Still.  The music is good and grandly sung.  The actors can act.  (Greatest praise to Steve Josephson as Mr. Marionette/Albert Brock, followed closely by Jonathan Lamer as Mr. Wycherly/Professor Faber and Lisa Morrice as Mrs. Wycherly/Clarisse McClellan,)  The first act is good.  The music is too.  I came out of the theater with that happy, elated feeling you have when the theater has done its job properly.  So I have no complaints.


Is it possible, as Charles Stross asserted the other night, that Agatha Christie started with a murder and wrote her novels without knowing who did it until the detective gathered everybody together, at which point she made up a solution and went back through the novel erasing everything that the ending now made impossible?

It sounded so plausible when Charlie said it.   But then, pretty much everything a writer says sounds plausible, regardless of how true or not it is.

I believe that's true about Christie. That's how I want to write.

Interestingly enough, Christie's working notebooks have recently been published, showing her to be a pretty thorough pre-planner, pushing her plots through school notebooks before pushing them through manuscripts.

If her notebooks can be published, one can hope that a trade edition of Scribbledehoypoloypalooza (or whatever you call it) may hit bookstore shelves some day.