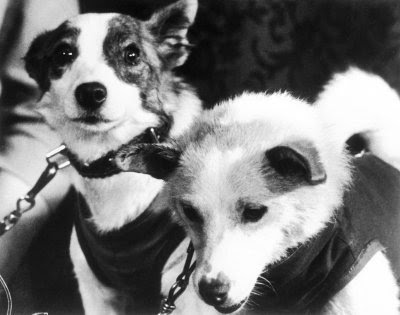 Fifty years and eight days ago, two dogs became the first animals ever to orbit the Earth in a spacecraft and return alive.  The August 18, 1960 flight was a major step in the Soviet space program.

Belka (Squirrel) and Strelka (Little Arrow) were not the first dogs in space.  That honor went to Laika (Barker) who on November 3, 1957 went up on Sputnik 2, only a month after the first artificial satellite was placed in orbit.  But because no provision had been made to return Laika to Earth, he died in space.

There were also two dogs who died when their rocket exploded seconds after takeoff.

The Soviet space program was far in advance of the American program at that time, but it was by today's standards a primitive thing.  Yet eight months later it launched the first human being, Yuri Gagarin, into space.

Belka and Strelka were both small dogs, so chosen because their capsule was not large.  They were also strays, because it was thought they would be tougher and more adaptable than pampered domestic dogs.    Not only did they survive the flight but Strelka later had six puppies.  Nikita Kruschev gave one of them, Pushinka (Fluffy) to John F. Kennedy's daughter Caroline.

I would have posted all this a week ago, but it's taken me this long to admit that I'm not going to be able to find the photograph of me with one of the two canine heroes of the Soviet space program.  Somewhere, however, it exists.  After they died, they were stuffed and placed in the Memorial Museum of Cosmonautics in Moscow.

Speaking of things that were sent into space by the USSR and returned to earth, I grew a kind of tomato last year (Cosmonaut Volkov) named for Soviet cosmonaut Alexander Alexandrovich Volkov. Supposedly the strain was developed from seeds sent into space and then grown on earth to see if cosmic radiation had scrambled its genes. Sadly I don't think it did; it seems to be a decent but generic non-hybrid red tomato strain with good disease resistance like so many other strains developed by ag research stations all over the world. A few years back NASA did the same thing with tomato seeds, and then sent them out to school kids to let them grow them into plants and report on the results.

There's a brilliant and incredibly moving graphic novel called LAIKA about the first tragic dog in space. Not to be missed.

This reminded me of a comic by Ryan North a few years back, about Laika.

Almost inevitably, I have a copy of LAIKA in my library. It makes me want to do a lot more reading into the early Soviet space program.

It took me years to discover that the crime for which Sergei Korolyov, the "Great Engineer," was sent to a Siberian gulag was rocketry. As an engineer, his talents belonged to the State. Wasting them on his own interests was considered thef.