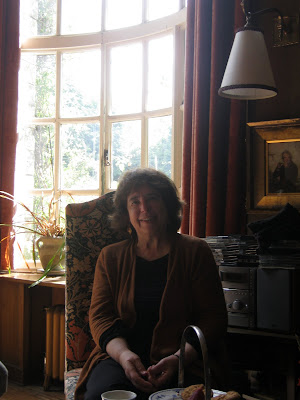 Probably the single best perk about being a writer is getting to hang out with other writers.  When I was in Chengdu, the editors of Science Fiction World showed their foreign guests all the local sights and threw banquets with extraordinary entertainments (including a truly astonishing mask-dancer) . . .  and yet the highlight was the evening we spent in a tea house, talking with our Chinese counterparts.

While I was in Scotland, Marianne and I, along with our friends Gail and Rob, dropped by Jane Yolen's house for tea.  That's Jane up above, sitting before the enormously tall window in the Great Hall.  Her house, you see, was designed by Sir Robert Stodart Lorimer, the second most famous architect of the Arts and Crafts movement.  (The most famous was Charles Rennie Mackintosh.  "They treated him so badly here that he left," Jane said of him.  "Lorimer stayed in Scotland.  That's why he's not as well known.")

I'd have to write a full-length article to do justice to the house.  There's what Lorimer called the Minstrel Gallery overlooking the Great Hall, with hand-carved paneling under the railing, stained-glass windows in the kitchen, Medieval-inspired door latches, some extremely nice plastering, a marvelous tiled fireplace . . .  All of which comes together in a harmonious manner that makes simply being there a pleasure.

It's hard to picture a more appropriate house for a storyteller. 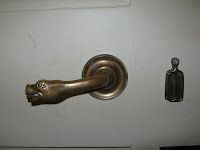 So Jane set out a generous selection of food and a pot of tea )several times replenished) and we talked.  We talked about architecture, and Scottish cheeses, and local restaurants, and life in New England, and the Festival Fringe, and Mary Queen of Scots, and children's literature, and fantasy literature, and publishing, and a hundred things more.  Including the fact -- I've mentioned this before -- that she's just finished her three hundredth book.

Three hundred books!  That's a hell of an accomplishment.  I was happy for Jane that she had such a lovely house.  But that fact made me even happier for her.

And of course the two facts are not entirely unrelated.

Above right:  A door handle.