But I Had a Wonderful Time Anyway 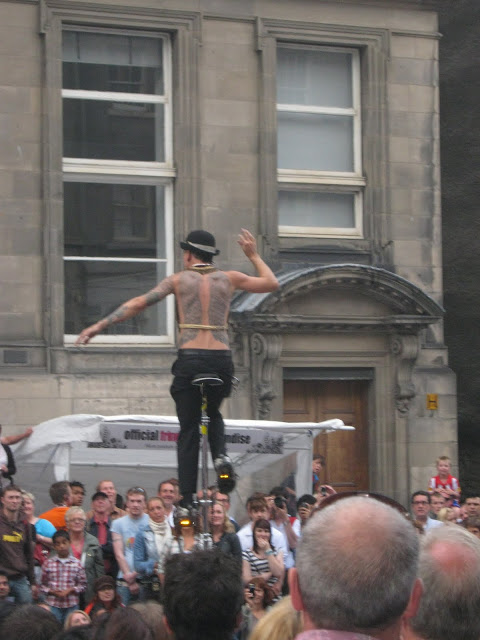 Yesterday I was feeling disorganized.  I dashed off into the Fringe without an umbrella, left behind my ticket to one of the shows in the venue's men's room (luckily, a friend used the john next and returned it to me), lost the shark's tooth out of my earring and left my media chip stuck inside my netbook back at the flat.


Which explains why I don't have a photo of Charles Stross to post today.  Marianne and I and our friends Gail and Rob went out to dinner and then pubbing with Charlie and his wife Feorag last night.  We wound up my favorite pub in Edinburgh, The Halfway House on Fleshmarket Close.  They bill themselves as "Scotland's Smallest and Friendliest Pub" and who am I to argue?  Certainly everybody I've ever seen there, customers included, has been friendly.  As for "smallest," well . . . it has two booths, three tables, and four stools at the bar.  If there's a smaller drinking place anywhere in the country, they've surely got plans to expand as soon as they can.


And I should probably mention a play I've actually seen . . .

Just so you don't think I'm spending all my time here with a glass in my hand.   The Norfolk Youth Music Theatre production of The Secret Garden was exemplary.  There's no getting around the fact that Frances Hodgson Burnett's novel was pretty gooey and no amount of tinkering is going to fix that.  But the children sang beautifully and acted convincingly, and Callum Bicknell as Archie Craven was a standout.  But there wasn't a bad or even a flat performance in the lot.

The adaptation turned the plot into something of a ghost story, where the original was all about Viridiana -- Nature as a healing force.  But each age is entitled to its own superstitions, and if ours are a little shallower than the Victorians', we have no one but ourselves to blame.

Above:  A street busker.  "Isn't that wonderful?  I can flip my hat in the air with no hands and catch it on my foot and hold it there while balancing on a two-meter-high unicycle longer than you can clap."