Things You're Not Supposed to Love 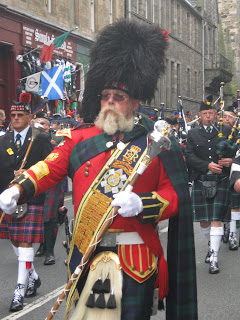 I am, as I may have mentioned, in Scotland -- the home of haggis and bagpipes.  For some inexplicable reason, our culture has got a down on bagpipes and haggis.  We are taught from an early age to dislike and despise the music of the one and the flavor of the other.  And yet . . .

And yet, I love 'em both.  On Saturday, after settling into our flat on Old Tollbooth Wynd, we walked the half-block up to the Royal Mile and discovered that pipe bands were marching down the road, wave after wave of them, hundreds upon hundreds of bagpipes playing.  It was glorious.

"Ew!" people say when I mention haggis.  "How can you eat that stuff?"  And then, upon questioning, it turns out that they've never tried it themselves and have no idea what it tastes like.

So I tell them that it's just scrapple, only made with oats rather than corn.  At which point they make the same disgusted noises before admitting that they've never tried scrapple either.

Their loss.  Last night at Wedgwood, which is only a block or two from our flat, I had the venison and venison haggis plate.  The joy I felt afterwards still lingers.


And I'm still pigging out on plays...

Four yesterday.  More today.  If I find the time I may blog about them yet.

For many years (with some lapses) we have held a Robbie Burns supper and attempted to evangelize haggis among Americans.

Some years we made it fresh, with organs from an Armenian butcher, and the results were good. But, when it's a uphill struggle to get people to take a bite of it in the first place, haggis from a can is a good compromise between effort and results.

Haggis from a freezer is, in our experience, just terrible.

One year we finally had a couple of guests who were genuinely enthusiastic about the haggis and fell to with great gusto. These gentlemen had something else in common: they were respectively the first- and third-highest all-time money winners on a long-running American game show. I conclude that haggis helps you win millions of dollars on game shows.

I've never got around to haggis, but there's nothing that stirs my heart more than a pipe band.

I'm pretty much immune to lone pipers, but massed pipes and drums make the hair on my arms stand on end (which incidentally is also my test for good poetry) and make me want to sneak over the border and steal the neighbour's cattle (but I can appreciate poetry which doesn't make me want to steal cattle, so the correspondence between the two is not perfect).

I told Charlie Stross that I liked bagpipe music, and he said, "I don't. I live here."

Before the truth one can only stand silent.

Perhaps related - I'm Australian and for the most part I enjoy Terry Pratchett's books - but I was unable to read his "Australia on the Diskworld" book, "The Last Continent" due to a powerful urge to throw the book not just at the wall but right through it.

Sometimes a little ignorance can be a blessing.