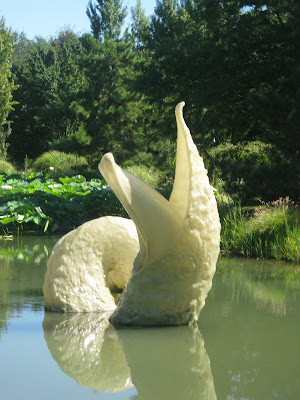 Friday, Marianne and I made a flying visit to take a brief look at Grounds for Sculpture in Hamilton, New Jersey.  That's just outside of Trenton,   You can find their website here.

G for S is basically an enormous sculpture park featuring work by "well-known and emerging artists."  That means no Brancusi, Bourgeois, Calder, Nevelson, Picasso, Giacometti, or Oldenburg.  But lots and lots of serious art, some of it challenging and all of it in astonishingly beautiful surroundings.  I'm convinced that landscapers must go there to look at the settings and ignore the art.

And of course there is a special pleasure in discovering artists you were not aware of previously.  This October there'll be an exhibition of Deborah Butterfield's cast-bronze driftwood horses.  They're astonishing.

I was glancing at an oldish book of criticism the other day and abruptly jotted down the following critical joi d'esprit.

The Shortest (Despite Its Title) Essay You Will Read This Year or Indeed Decade and Possibly Even Century Dealing With the Critic John Clute's Collection of Reviews Scores Which Actually Manages Almost Despite Itself to Say Something Meaningful About the Book as a Whole
The other day, I decided to look at Scores structurally -- how it begins and how it ends.  The book has an introduction, followed by a decade's reviews, followed by an afterword.  The introduction begins "Here is another book."  The text proper begins "Here is a short story about academia."  The reviews end "It is, after all, a story best understood as sf, a story about the best  case in the world."  The afterword ends "We are all going to die if we do not say something good."

So for Clute it all begins and ends with and as story.  But we keep in mind that he believes  -- and in the book frequently states -- that science fiction is effectively over, then it is obvious that, to Clute, what begins with a symbolic birth ("It's a fiction!") necessarily ends in a bitterly regretted death.

Above:  Carmelita by Austin Wright.  Apparently it lights up at night.

Not necessarily death; Clute hasn't figured out what the result of the metamorphosis is yet, but I suspect he knows that there is a chrysalis, not a sarcophagous, borne of the transition works.