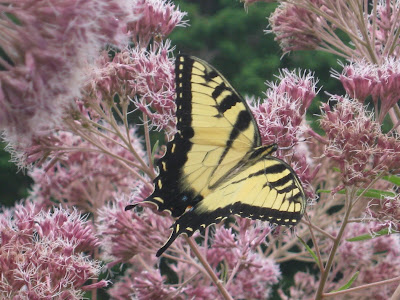 Carthage delenda est!  Or at least my Quixotic quest to write 42 Tuckerizations in as many days.  In the end, somehow I managed to miss one day -- probably one of the days I was driving to or from Pittsburgh in the last couple of weeks.  So today I post my 42nd story in 43 days.

But wait -- there's more!  One more, to be specific.  The Clarion West folks tend more toward the Asimov's side of the SF spectrum than to the Analog side.  Which is to say, they're a little weak on math.  They multiplied six weeks times seven days and came up with 43.  So there'll be one more and final work of flash fiction tomorrow.  Will I end in grand style?  We'll know as soon as I write it.  Tomorrow.

Stay tuned and fine out.

Meanwhile, here's today's story.  It was commissioned by Gregory Scheckler, who mentioned that he liked to eat summer raspberries with vanilla ice cream.  So I wrote:


Vanilla Raspberries with Summer Ice Cream
by
Michael Swanwick
Artists are subtle and quick to wrath.  They strike like lightning and they choose their enemies almost at random.  So it’s entirely possible that Gregory Scheckler had never met whoever it was who dosed his coffee with a synesthetic drug.  It could well have been a stranger who envied his work.  It might have been an artist manqué driven mad by aesthetic theory.  It could even have been someone with no motive at all – a student, perhaps.
All Scheckler knew was that shortly after drinking that coffee the blare of car horns in the street outside was a jagged orange and the morning sun slanting through his office window smelled of honey and cinnamon toast.  The coffee dregs, when he sniffed them, felt like flannel.  So did the empty vial he found on the floor by his desk.  When he stepped outside hoping the air would clear his head, a breeze sprang up that tasted like sugared grass clippings.
So far, so odd.  But when he started mixing paints on his palette, preparatory to an oil he’d been planning for some time, the cadmium yellow was as loud as a chromed truck horn and the French ultramarine as cold and salty as the water in the Marianas Trench.  He dropped his brush in astonishment and its clatter on the floor felt like six sharp little raps on his knuckles.
He couldn’t work like that.  Nobody could.  If this continued, it would be the death of his art.
In a panic, Scheckler fumbled out his cell phone (it felt like garlic butter and celery) and tapped out the number for a friend in the Chemistry department.  “Hello?” said a voice as rich and smooth as black granite, and Scheckler’s words tumbled out like so many sulfur-scented canaries.
“Okay, I know that one,” his friend said.  “You’ve got nothing to worry about.  It’ll wear off in a few hours.  Just take it easy and drink plenty of fluids.  Do you want me to come over and stay with you?”
Scheckler took a deep magenta breath.  “No . . .  no need.  I’m going out.”
“Out?”  A distinctly denim texture entered his friend’s voice.  “Where?”
“On a picnic.”
Scheckler spent the rest of the morning outside, listening to the wind ruffle gold through the aspens.  Eating . . .
*

Above:  Marianne and I went for a walk at the Morris Arboretum today.  We saw a butterfly.  This caption sounds like one of those essays I had to write in second grade.
Posted by Michael Swanwick at 3:35 PM

By my reckoning, you've done 42 Tuckerizations in 42 days. The first was delivered June 21, my mother's birthday and the ninth was June 28, my wife's birthday. Counting ten stories for June, thirty-one for July and today's, I come up with forty-two.

It's been a brilliant ride regardless, and tying those together with the twenty flashes on your website, and The Sleep of Reason would make a fine treat.
Thanks for all these.

thanks for the tuckerizations -- lots of fun and a delight to sponsor some of your work. :)