"One of the Master Short Fiction Writers..." 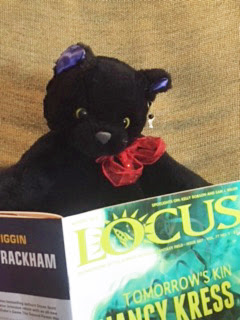 And in the mail to greet me is this month's Locus, with Gary K. Wolfe's review of my just-published new collection Not So Much, Said the Cat. Here's some of what he had to say:

Michael Swanwick has been one of the master short fiction writers in the field for decades, and one of the most eclectic. He seems to know so many traditions of fantastic literature that you can sense his glee at being able to juggle them, often in the same story, in a way that is somehow both deeply original and playfully allusive.

Even when a story begins with a sequence that seems familiar from a hundred SF or horror stories, Swanwick opens it out in unexpected ways, and demonstrates as consistently as anyone now working that the craft oft he literary short story and the materials of SF and fantasy can not only be compatible, but impressively synergetic.


I never express gratitude for a review because that seems to me an insult to the reviewer. Thanking one for a positive review would imply that the review had been slanted as a favor to the writer under question. But there's no denying that I found this review very satisfying.


And for those who crave food for literary thought...

Also in the August Locus is an interview with David D. Levine, in which drops this intriguing theory by our old friend Anonymous (but maybe the interview will prompt the theory's creator to step forward and take a bow.):

I read an essay in a fanzine years ago... predicated on the idea that science fiction grew out of a tradition of sea stories that started in the 1700s...The idea that you can travel from one planet to another in a matter of weeks or months rather than days or decades. The fact that the captain of the starship is the one who is in charge, that there is no effective communications between captains and their bosses back home, the relationships of people within the ship, the relationships of people on the ship to the places they arrive, the idea that each island has a single culture -- a single climate, a single religion, a single language -- all of these science-fiction tropes come directly from the sailing mechanics and realities of 1700.


Which, true or not, you have to admit is pretty nifty. I could argue it both ways.

This is, incidentally, one of many reasons I subscribe to Locus -- to be surprised by intelligent discourse.


Above: Beelzebub, minor prince of darkness, checking out his reviews.

Star Trek is the mass-media descendant of that branch of science fiction. I don't think anyone could dispute that the 5-year mission of the U.S.S. Enterprise is modeled on 17th-to-19th-century voyages of exploration and fictionalized versions of same. Every bit of it from the torpedoes to the landing parties is a pre-twentieth-century nautical metaphor: notably, the starships are like sailing ships from the era when sailing ships were the fastest/only means of transport.

A different branch of science fiction is future war fiction, and Star Wars and Battlestar Galactica come from that by way of Flash Gordon and Buck Rogers. That branch is more heavily influenced by World War I and World War II metaphors: less exploration-based and more war-based plots, and the spaceships are single-seat fighters flown by joystick, that dogfight and then perhaps return to aircraft-carriers-in-space.

I read that essay in a paper fanzine in the 1970s or 1980s (it might have been an older fanzine than that, but not newer) and the title was "The Science Fiction Archipelago." If anyone can track it down I would love to be able to credit the author!